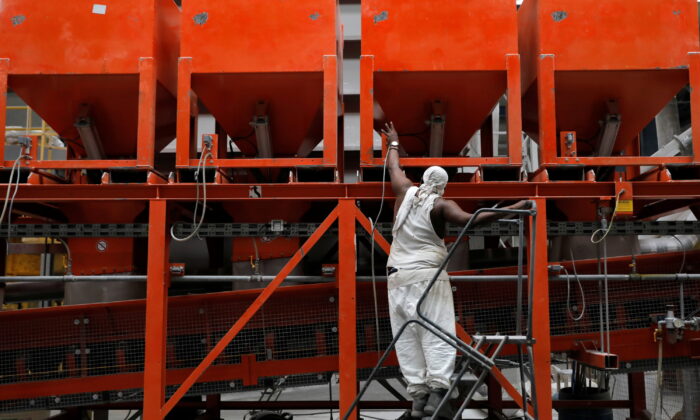 A worker checks equipment in the factory at IceStone, a manufacturer of recycled glass countertops and surfaces, in New York, on June 3, 2021. (Andrew Kelly/Reuters)
New York

Manufacturing activity in New York state tumbled in August, according to the New York Federal Reserve.

The general business conditions index plunged by 42 points, to minus 31.3, data from the Fed’s Empire State Manufacturing Survey results for August show. That’s the second biggest monthly decline in the index’s history and also one of its lowest levels. A reading below zero is an indication of contraction.

Both indexes are at their weakest level since May 2020, when the economy began emerging from the pandemic lockdowns. The index of inventories declined, to 6.4, indicating a marginal increase in stocks. About 200 manufacturing executives, typically the president or CEO, are polled monthly in a variety of industries in New York state; about 100 responses were received.

The manufacturing survey likely showed that “industries extrapolated orders from the COVID period, and they ordered too much stuff,” said Thomas Costerg, senior U.S. economist at Pictet Wealth Management, according to Bloomberg.

“What we’re seeing and what explains the violence in the downtrend is that it seems that manufacturers are seriously reexamining their orders, and I suspect in many cases simply canceling.”

In a note on Aug. 15, Ian Shepherdson, chief economist at Pantheon Macroeconomics, called the data “startlingly terrible,” according to CNN.

“Momentum in the manufacturing sector certainly has slowed, but this is a collapse,” he said, while adding that the scale of deterioration is “scarcely believable” since other indicators do not seem to be supporting such conclusions.

The index for future business conditions was recorded at 2.1, indicating that businesses aren’t too optimistic about the outlook over the next six months.

Technology spending and capital spending are only expected to grow modestly in the coming months. There was a small increase in employment and a decline in hours worked. However, labor market indicators mostly weakened, the Fed stated.

On a positive note, unfilled orders and the delivery times index declined for the first time since May 2020, while the prices paid index fell to its lowest level since February last year, potentially suggesting an easing in supply chain issues. However, this might also be partly a reflection of easing demand.