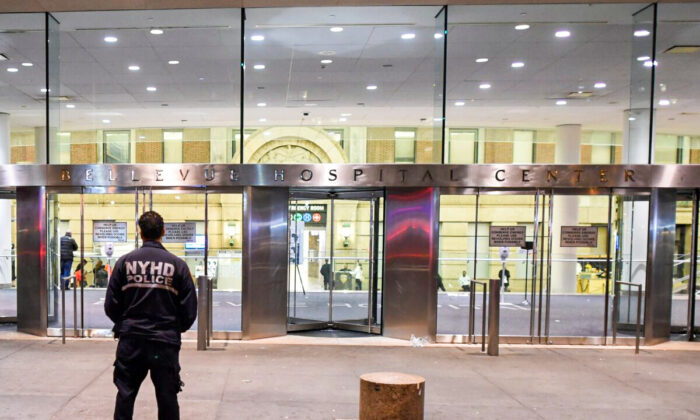 A New York City Department of Health and Hospitals Police (NYHP) officer walks past the entrance to Bellevue Hospital in New York on Oct. 23, 2014. (Timothy A. Clary/AFP via Getty Images)
US News

A presumptive case of monkeypox infection is being investigated in New York City following one confirmed incident that was earlier reported in Massachusetts.

NYC health officials confirmed Friday (pdf) that a resident from the city has tested positive for the family of viruses that includes monkeypox. The patient is currently in isolation.

Officials had earlier said on Thursday that “all appropriate isolation protocols” are being followed with regard to the patient.

After the Health Department’s Public Health Lab gets a positive response from the preliminary tests, it will be sent to the U.S. Centers for Disease Control and Prevention (CDC) for “confirmatory testing,” health officials said in a May 19 news release.

“The Department’s epidemiologists will follow up with any individual who may have been in contact with the patient while infectious.”

One more person was tested for potential infection by NYC health officials. However, the case was ruled out.

The CDC is already looking into a confirmed monkeypox case in a man from Massachusetts who had recently visited Canada.

In addition, the agency is monitoring six people for potential infection after it came to light that they sat near an infected traveler during a flight in early May.

The United States has placed a $119 million order for Bavarian Nordic’s Jynneos vaccine, which is effective against both smallpox and monkeypox infections. An additional $180 million has also been set aside to order more vaccines if required. Combined, the United States is able to secure 13 million vaccines for its citizens.

Monkeypox, which is a more benign version of smallpox, is a virus that is endemic in the West and Central African regions. Usually, it does not trigger any large outbreaks. In Africa, only a handful of cases occur each year. In the United States, the most severe outbreak occurred in 2003, the first time a monkeypox outbreak had happened outside of Africa.

The infection first creates a rash with red marks that ends up becoming filled with pus. The infected person can also feel body aches and catch a fever. After being exposed to the virus, symptoms take anywhere from 6 to 13 days or up to three weeks to appear.

The CDC warns that there is no “no proven, safe treatment” for the monkeypox infection. “For purposes of controlling a monkeypox outbreak in the United States, smallpox vaccine, antivirals, and vaccinia immune globulin (VIG) can be used,” according to the agency.

Jennifer McQuiston, deputy director of the Division of High Consequence Pathogens and Pathology within the CDC’s National Center for Emerging and Zoonotic Infectious Diseases, is worried about a rise in monkeypox cases in the country.

“We have a level of scientific concern about what we’re seeing because this is a very unusual situation. Monkeypox is normally only reported in West Africa or Central Africa, and we don’t see it in the United States or in Europe—and the number of cases that are being reported is definitely outside the level of normal for what we would see,” she said to CNN.

However, she insisted that the general public should not be concerned about whether they are at immediate risk of monkeypox infection since not many cases are being reported.

At present, the CDC is evaluating whether they need to distribute smallpox vaccines to health care workers who are treating monkeypox patients as well as other individuals who might be at high risk of exposure to the infection, McQuiston added.

In the EU/EEA region, 26 cases were confirmed as of May 19, with males being the most infected among the two genders, according to a May 20 epidemiological update by the European Center for Disease Prevention and Control.

“The majority of cases have been in young men, many self-identifying as men who have sex with men (MSM), and none with recent travel history to areas where the disease is endemic,” it said.