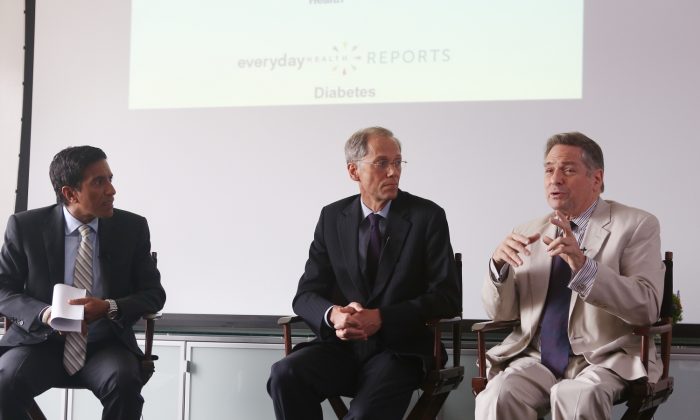 NEW YORK—Type 2 diabetes rates are up around the city, and the rates in the Bronx are about two times higher than in Manhattan.

Diabetes is the city’s “number two health problem,” associated with 6000 deaths each year, Health Commissioner Thomas Farley said at a conference at Everyday Health’s headquarters in lower Manhattan on July 31. “This is really an epidemic,” he said.

The Health Department has been pushing for prevention of obesity and diabetes by giving access to healthier foods and encouraging people to get more physically active.

“Conceptually it ought to be easier to switch to a healthier diet than to take a pill every day,” Farley said.

The department has been working with storeowners in some Bronx communities to get them to sell more fresh, unprocessed foods, rather than highly processed ones.

Farley said, “We are working right now with bodegas in the Bronx and stores citywide to try to both encourage them to have a healthy mix of products and also work with communities to demand those healthy products.”

He said diabetes, and the complications associated with the disease, was one of the biggest drivers in the increase in health care costs.

“Nationally it’s estimated that it’s about $175 billion a year to care for people with diabetes. To translate that to New York City, that’s over $5 billion a year, just for the city, just for medical care. … Or to put it in terms that people can understand, that’s more than $1,000 per household per year, that everybody’s paying whether you have someone in your family who has diabetes or not. Because we all pay those costs in terms of insurance premiums, or taxes,” Farley said.

The Health Department has also been running an advertising campaign citywide, highlighting the dangers of drinking too many sugary drinks.

Farley said the department would be appealing a decision made by a New York appeals court on July 30, which upheld a lower court’s ruling blocking Mayor Bloomberg’s push to ban large-sized sugary drinks in the city’s eateries.

Type 2 diabetes is also becoming a problem in children.

“We can’t blame the problem on kids. It’s us adults that create the food that we serve them at home, at school, in neighborhoods, and in society in general,” Farley said.

Childhood obesity rates have declined 5 percent over the last five years, a small decline after 30 years of progressively rising. “It’s a little glimmer of hope in a big problem,” Farley said.

He added, “We are trying to change what’s served in schools, and encouraging parents to serve healthy food at home, and have healthy food in neighborhoods.”

Diabetes in the Bronx

Nearly one in nine adults in New York City has been diagnosed with Type 2 diabetes, according to the statistics released by the Health Department July 31.

Joel Zonszein, the director of the Clinical Diabetes Center at Montefiore Medical Center in the Bronx, said 53 percent of residents in the Bronx are Latino, and they are a susceptible population when it comes to obesity and diabetes.

He said a lot of African-Americans also ended up in the emergency room, for complications related to diabetes, which could end up being very expensive for them.

He said low-income families often bought calorie dense food, and that Type 2 diabetes is very complicated to treat, so prevention is by far the best.

Farley said Type 2 diabetes is linked with obesity and poverty. People who lacked access to healthy foods were more likely to be diagnosed with the disease.

About 670,000 New Yorkers are currently undergoing treatment to deal with Type 2 diabetes.

From 2002 to 2012, the percentage of adults with Type 2 diabetes increased from 8 percent to 10.7 percent, according the Health Department.

“We’ve got a population-wide phenomenon, that we’re not going to be able to solve one person at a time, so we’ve got to think big,” Farley said.