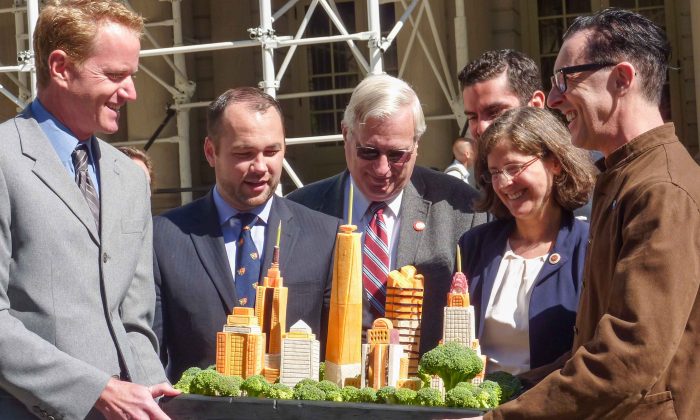 New York City Is Most Vegan-Friendly

NEW YORK—Formerly the meat-eater’s den, New York is this year’s “Most Vegan-Friendly City,” said PETA Wednesday on the steps of City Hall.

The intricate vegetable carving is made of taro root, radishes, eggplant, banana leaves, and an abundance of other legumes.

New York earned the platter of fresh produce after a spate of vegan restaurants opened throughout the city, making vegan dining a rarity no longer.

“It used to be that there was a lot of fine vegan dining, but now it’s become vegan fast food like Terri in Midtown,” said Dan Mathews, senior vice president at PETA.

“With all the veggie restaurants sprouting off-shoots throughout the city, New York was the obvious winner this year.” He added, “And the clincher for us was the fact that the very first vegetarian school sprung up in Queens.”

Veganism is a national trend, according to Mathews, and “New York is just on the cutting edge of it.”