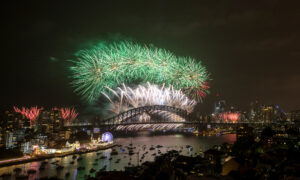 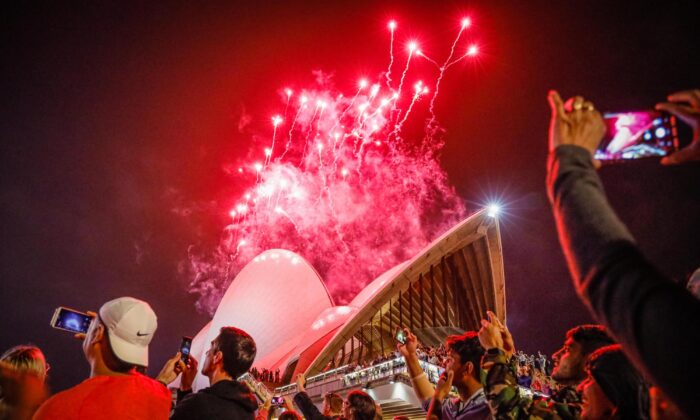 Sydney has largely banned crowds for its world-renowned pyrotechnic display, while Melbourne’s fireworks are cancelled.

New South Wales restrictions were tightened further on Wednesday as the state battles to control its growing outbreak.

Residents in Greater Sydney, including Wollongong, Central Coast and Blue Mountains, will be restricted to hosting five visitors in their homes, including children.

The limit for outdoor gatherings will be reduced from 50 to 30.

Restrictions for the northern zone of the Northern Beaches remain the same, while those in the area’s southern zone will be allowed five visitors, including children, from within the zone.

And while boats will be allowed on Sydney Harbour, they will have to abide by strict guidelines.

Rain is forecast and this will be good news for authorities, who are urging the public to watch the shortened midnight fireworks display on TV.

The 9 p.m. kids-friendly fireworks will not go ahead and people will need permits to enter zones at Circular Quay, North Sydney and the CBD.

Likewise, the Victorian government is urging people not to head into Melbourne on Thursday night unless they have a hospitality booking.

Melbourne’s fireworks would normally attract nearly half a million revellers but the display was cancelled more than a month ago.

Instead, the city has set up outdoor dining precincts to celebrate its hospitality industry.

Melbourne has a forecast in the low 20s for Thursday and Brisbane, like Sydney, is expecting rain.

That’s in marked contrast to Adelaide, where sunny and hot conditions are forecast.

South Australians may have no more than 50 people at their house—whether indoors or outdoors—for New Year’s Eve.

A maximum of 200 people will be allowed at private outdoor gatherings.

Canberra will drop its fireworks for the second year in a row, joining Adelaide and Brisbane in cancelling their displays.

Residents of the national capital have also been told not to travel to Greater Sydney, or any other COVID-19 affected area, and to reconsider travel to NSW more broadly.

Hobart’s fireworks will go ahead but like Sydney, people are being urged not to gather on the waterfront.

Tasmania Police said patrols would be conducted in the entertainment precincts of Hobart, Launceston, Devonport and Burnie to deter alcohol-related offences and violence.

Darwin residents will need to register and wear wristbands to attend the city’s two fireworks displays on Thursday night.

In marked contrast to the rest of the country, Perth’s celebrations will be nearly normal and there will be two fireworks displays.

But people are still being urged to register their details, stay socially distanced and use hand sanitiser.