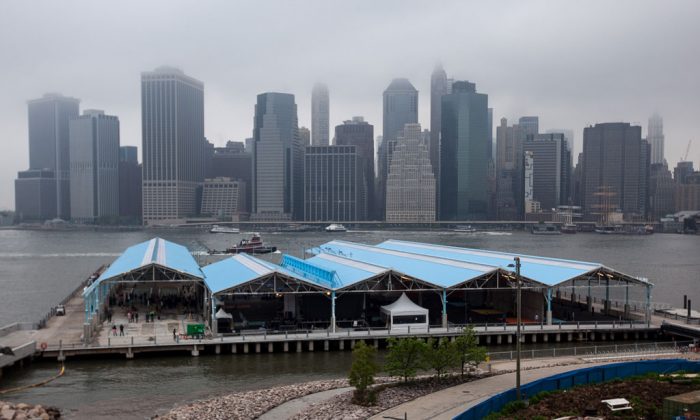 New Sports Complex and Beach With Smashing View in Brooklyn

NEW YORK—Just in time for Memorial Day, Brooklyn Bridge Park has opened Pier 2 and Pier 4, places for sports and rest on the East River waterfront in Brooklyn Heights.

Pier 2 is a five-acre roofed space that includes basketball, handball, shuffleboard, and bocce courts, a workout area, and playground.

Pier 4 offers a one-acre sand beach and a launching place for nonmotorized boats. It’s all free and complete with a view of downtown Manhattan and the Brooklyn Bridge.

Half of the Brooklyn Bridge Park complex is still under construction, so access to the piers is a bit complicated, but it’s still within walking distance from the Clark Street subway stop.

The park “leads the way in reclaiming the city’s waterfront,” said Silver. “I look forward to seeing this beautiful public space being enjoyed by all.”

The park dates back to 2010, when Pier 1 was opened. A few other facilities were phased in over the years and last November the Pier 3 Greenway Terrace was added.

Pier 2 was built in the 1950s for commercial shipping and warehousing. It stands on 2,500 timber piles and the No.2 and No.3 subway lines tunnel under it. Much of the original structure was preserved.