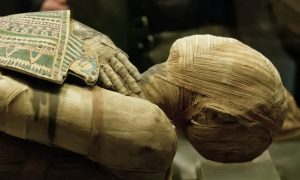 In November last year, scientists announced that they had finally solved the mystery of King Tutankhamun’s death after 3,300 years. The boy king, they claimed, died after being struck by a speeding chariot. However, a new ‘virtual autopsy’ of the world-famous pharaoh has revealed that serious genetic physical impairments would have made riding a chariot impossible. According to a report in The Independent, the results instead suggest that Tutankhamun succumbed to genetic impairments that were caused by the fact that his parents were brother and sister.

Tutankhamun was the 11th pharaoh of the 18th Dynasty, a period of Egyptian history known as the New Kingdom, which was Egypt’s most prosperous time and marked the peak of its power. The king, who began his reign at the tender age of ten, became one of the most famous pharaoh’s of Egypt following the 1922 discovery of his opulent tomb by Howard Carter, along with his body and spectacular golden mask, and the tales of the supposed curse placed upon his tomb.

In February 2010, the results of DNA tests confirmed that he was the son of Akhenaten and Akhenaten’s sister and wife. Marriage within family was not uncommon in ancient Egypt and was practiced among royalty as a means of perpetuating the royal lineage. The pharaohs believed they were descended from the gods and incest was seen as acceptable so as to retain the sacred bloodline. However, what they were unaware of the time was the severe consequences of family inbreeding. The fact that Tutankhamun’s parents had been brother and sister, resulted in numerous genetic conditions that the boy king suffered, including a cleft palate, a club foot, feminine hips, and a severe overbite.

Mystery has surrounded Tutankhamun ever since his death in 1323 BC, aged 19.  Theories have ranged from violent murder to leprosy and even a snake bite. The most convincing explanation to have emerged was last year’s announcement that he had been struck by a chariot. This hypothesis had been supported by substantial evidence including x-ray and CT scanning technology which revealed a pattern of injuries down one side of his body. Computer simulations conducted by expert crash investigators showed that Tutankhamun’s injuries were consistent with those that would have been sustained in a chariot accident.

However, new research based on more than 2,000 computer scans and a genetic analysis of Tutankhamun’s family, suggests that the boy king could never have ridden in a chariot because of his serious genetic physical impairments, including his severe clubbed foot, which prevented him from standing unaided. This is backed up by the discovery of 130 used walking canes in his tomb.

The virtual autopsy revealed that only the fracture in his knee occurred before he died, while fractures in his skull and other parts of his body occurred after the boy king was already dead – leading scientists to believe he may have succumbed to an inherited illness.

Professor Albert Zink, head of the Institute for Mummies and Icemen in Italy said that the young royal’s death was most likely caused from him being in a weakened state as a result of genetic impairments inherited from his brother and sister parents. The study also showed that the frail king was afflicted with malaria, which may also have been a serious factor in the cause of death.

The complete findings were shown for the first time in BBC One documentary Tutankhamun: The Truth Uncovered last month.