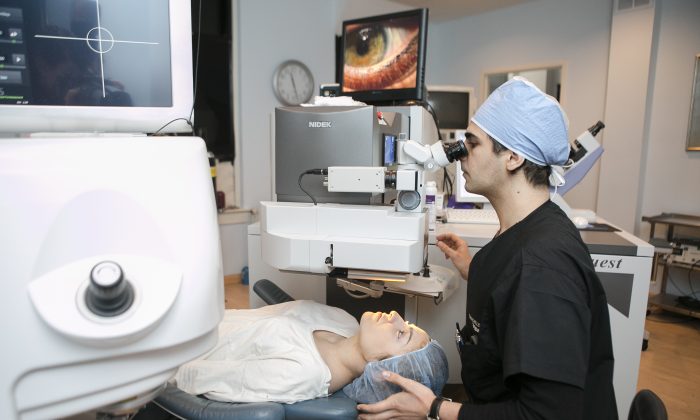 NEW YORK—Dr. Steven Stetson spoils his patients with technology. The former Air Force ophthalmologist is the medical director at Diamond Vision in Manhattan, which specializes in laser-guided vision correction.

Slip on some booties to take a peek in his surgically clean office, and you’ll be met with a range of the newest and best tools in the field, all of which Stetson purchased with the belief that more granular data means more precise diagnoses, which mean better care. These tools range from state-of-the-art lasers to a device that helps the eye self-lubricate.

Stetson’s latest investment is a fresh-to-market laser: the half million dollar NIDEK Quest.

“The NIDEK Quest is very new,” Stetson said. “The FDA approved it only this past spring. It’s been very well received among surgeons, and it’s been in Japan for quite a while.”

He said there are only around 24 in the United States and about 250 being used worldwide.

The Quest uses topography-guided laser technology to help him figure out which part of the eye is causing vision problems.

Most of the time when vision abnormalities happen, it’s because something’s wrong with the cornea. A bunch of things could go wrong with it: surface cell buildup from contact lens wear, warping, injury and scratches from rubbing the eye, and infection.

But visual aberrations could also come from the lens, the retina, or even the shape of the entire eye, according to Stetson.

Just take the common eye problem, myopia or nearsightedness, as an example. Myopia is typically caused by an eyeball that’s too long, focusing light short of the retina, thus feeding your brain an unfocused image. To complicate matters, sometimes the cornea is too curved, adding to the light distortion. So how much of the blame should be ascribed to the cornea and how much to the rest of the eye?

Before the NIDEK Quest, doctors could never “read” the cornea specifically, only the whole eye. For example, an older laser Stetson has, the wavefront-guided custom VISX S4 laser, which he used to correct the eyesight of military pilots, bounces light through the entire eye and spits out data. It won’t tell you whether the abnormalities are due to the cornea or another structure.

“That way you might get diluted or distracted data,” Stetson explained. “It develops a treatment that could take too much tissue or overcorrect the eye.”

Now, with the Quest, “you can isolate what part of the refraction problem is due to the cornea,” he said. “I can be more conservative and more of a sleuth—an investigator.”

It also allows the doctor to choose exactly the area to operate on and then blend the laser treatment out into the periphery, making for a gradual fade between treated and non-treated tissue.

“It blends the boundary between treated and non-treated tissue, so it reduces the likelihood of post-op glare and halos, especially at night,” Stetson explained.

In addition, whereas a custom treatment plan is not an option on the VISX for those with small (less than 5 millimeter) pupils, it’s not a problem for the Quest.

All of these points are improvements over the VISX, although this is not to say that Stetson’s abandoning it or any of his other diagnostic tools.

“Both work great and in different yet complimentary ways. I don’t have to do it one way anymore,” he said. “I now do diagnosis on both platforms, and between the two of them, I can hone on the specific issues relevant for each individual patient, which results in the best outcomes.”

Stetson’s Other Gadgets and What They Do

In 2009 he bought a VISX S4 laser, the same laser he used to correct the eyesight of military pilots. The laser was then upgraded for “iris registration,” allowing more precise computer-based tracking of treatments.

The same year he also bought a Pentacam to analyze the cornea inside and outside, allowing him to place implantable collamer lenses with precision and better diagnose corneal problems before any surgery.

In 2012, Stetson acquired an iFS laser to make ultra-thin laser flaps, and he was the first in the tristate area to own such a machine. That same year, he also got his first NIDEK laser for more precise glaucoma and cataract procedures.

He followed it up with the LipiView and LipiFlow platform in 2013, a $100,000 device that treats chronic dry eye by optimizing oil gland function.