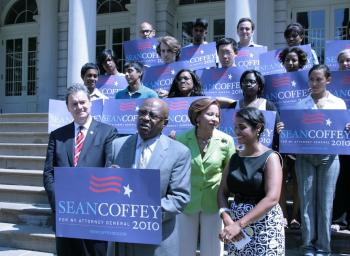 Andrea Hayley
Reporting on the business of food, food tech, and Silicon Alley. Studied the Humanities for undergrad, and obtained a Master of Arts in business journalism from Columbia University. I love covering the people, and the passion, that animates innovation in America. Email me at andrea dot hayley at epochtimes.com
View profile
Follow
biggersmaller
Print
NEW YORK—The least known democratic nominee for New York state attorney general this year, former Navy Cpt. Sean Coffey, held a press conference on Monday at City Hall to make public his most recent endorsements.

“Experience with Wall Street is a must and frankly that is why there is no other candidate Republican or Democratic, who has my experience taking on powerful interests on Wall Street,” said Coffey, who was flanked by his endorsers, including Congressman Ed Towns, Congresswoman Nydia Velazquez, and City Councilwoman Diana Reyna.

Coffey touted his most notable accomplishment, leading litigations in a famous lawsuit that won against Worldcom Inc. The lawsuit penalized company directors and netted $6.15 billion in assets for shareholders in 2005. If he wins, Coffey said clearing up Wall Street and Albany will be his top two priorities.

Coffey’s outsider status comes from having never served directly in politics unlike all the other candidates running. But that doesn’t mean he is a stranger to public life.

The son of an Irish immigrant family, Coffey won an appointment out of high school to the United States Naval Academy and retired 30 years later as a Navy captain, notably having been tasked with tracking Soviet submarines during the Cold War and serving as the personal military assistant to then-Vice President George H.W. Bush.

Coffey completed his law degree at night while still in the Navy, then retired after 30 years to take a job as assistant U.S. attorney in the Southern District of New York followed by a successful 11-year career as a partner at Bernstein Litowitz Berger & Grossmann, where he said he regularly took on corporate America before retiring in October of last year to pursue the state’s top legal job.

“When Wall Street misbehaves, really, really bad things happen on a large scale,” said Coffey. “The vast majority of Wall Street is honest, but there are people who make $10 million a year who think that if they cross the line they will get 20, 30 or 40. Those are the people that I want to go after. The depth of [the recession] and the severity of it are traceable to Wall Street misconduct.”

While maintaining a watchful eye on corporate and political corruption and greed, Coffey said as “the people’s lawyer” he will focus on legal protections from complex street schemes, scammers, street crime, violent street crime, and fraud.

“They need an AG with the experience to aggressively identify, investigate, and prosecute those that seek to live outside and above the law and hurt New Yorkers in the course of doing so,” he said.

The attorney general commands an office of 650 assistant attorney generals and over 2,000 employees, and answers to the people and to the state, while maintaining independence from the state.

Coffey also said he is not intimidated by the prospects of the political environment in Albany.

“I was a partner at a major defense firm and I went into the plaintiff’s bar and people said that is going to be a stink pit, you are going to get eaten up, and after six years I was leading it, so I want to do that in Albany.”

“Stay tuned. Today is the day we start to lead!” he added.