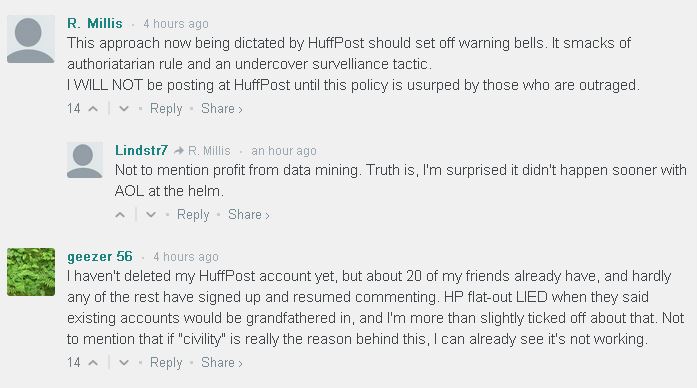 New requirements on Huffington Post, also known as HuffPost, are riling many users and prompting some to leave the website altogether.

In order to “maintain a civil environment for real conversation,” the new requirements focus on getting users to create an account using their full name or their first name and last initial, according to Huffington Post.

The move has upset many Huffington Post users, as seen in the comments on a piece by Poynter about the move.

Poynter points out that among the top 50 news sites in the U.S., all but seven permit commenting via Facebook, but only three required a Facebook account to connect. Many websites use plug-ins that accept users from other social networks, such as Twitter and Google+.

One user, “TheRewd,” said on the piece that he refused to become verified on Facebook because he didn’t want to give Facebook his phone number, and he was also upset for the connection.

“This has to do with one thing and that being the data contained in my Facebook account,” he said. “I was not about to give HP access to that just so they could further their advertising not only to me but also my ‘friends.’ They say it’s about ‘civility’ but you’re talking about a site that has one of the most onerous filters in the industry plus a system that ‘premoderates’ every comment. In practice that means you have ideologically driven moderators who spike comments most times simply because they disagree with the point being made, not for any amount of civility though I guess having a website made up of nothing but people who think alike might be considered civil. HuffingtonPost is extremely protective of their contributors and will go to great lengths to not publish comments that disagree with them.”

Another user added: “Yep. I’m done with HP also. Its all about getting personal data for their advertisers (and possibly a side deal HP made with Facebook). I suppose I’ll have to get my news from actual news websites now. Goodbye HP!”

Another one added: “Goodbye HuffPo. People have to be CRAZY to link all their internet activity back to any single acct. HuffPo must be nuts if they think people will feel comfortable discussing controversial topics such as personal relationships, politics or religion using their real names that can eventually be traced to their Facebook account where employers can punish people they disagree with.”

Yet another said: “I’ve had an account with HP for five years. Cancelled it yesterday and won’t be back. The whole situation, from premise (‘This will make people more civil’) to broken promise (‘Existing users won’t be affected’) is just weird, and the way it was sprung on us was extremely disrespectful.”

“When you log in to your account and go to make a comment, you will be prompted to link your commenting account to your verified Facebook account. Then, choose how you’d like your name to be displayed. You can either display your first and last names, or your first name and last initial. This is the only information that will be viewable to the community at large, and you will have control over your private information via Facebook’s privacy settings,” he said.

“If you do not want to link your Huffington Post account to Facebook, you can still log in to your account and fan and fave other users and their comments. And if, for whatever reason, you fear posting a comment under your name — if you are a whistleblower, or fear harassment, or any other reason — you can apply for the right to comment anonymously by filling out this form.”