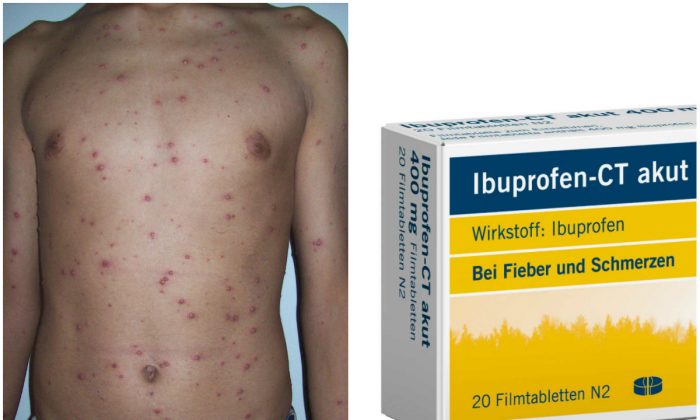 Never Give Ibuprofen or Aspirin to Child With Chicken Pox

Hayley Lyons learned the hard way that even with the most common prescription drugs you need to be careful.

The mother of three from Warrington, England, recently saw her son Lewis come down with chicken pox. As his temperature stayed high, four different doctors prescribed ibuprofen, a common anti-inflammatory drug and painkiller.

But not only did Lewis’s temperature kept rising, the pox blistered more and more too. Ultimately, Lyons had her son admitted to Alder Hey Children’s Hospital in Liverpool where he was diagnosed with septicaemia, a life-threatening infection complication also called blood poisoning.

Thanks to the hospital’s care, Lewis recovered.

“This could have ended up so much worse,” Lyons wrote on her Facebook post about the experience, according to Manchester Evening News. The post has been shared almost 440,000 times.

Only in retrospect, Lyons wrote, she found that ibuprofen should not be taken with chicken pox.

Ibuprofen Kills Thousands Each Year, so What Is the Alternative?

“But when our doctors prescribe it, who are we to question it??” she wrote.

The British Society for Paediatric and Adolescent Rheumatology is even more direct: “Ibuprofen should be stopped if your child develops chicken pox.”

Search of the U.S. Food and Drug Administration website didn’t reveal a single mention of adverse effects of ibuprofen on chicken pox patients.

The FDA, however, does warn to not give aspirin to children with chicken pox, as that could lead to the Reye’s syndrome, a life-threatening brain disease.

Some popular medical advice sites, such as WebMD, list ibuprofen along with acetaminophen (Tylenol) as options to relieve pain and fever symptoms, but warn against aspirin for anyone under 20. The site also recommends always checking with a doctor before giving over-the-counter medicine to children.

The website of the National Health Service, England’s publicly funded health care system, states that drugs such as aspirin or ibuprofen carry “very small risk” of “causing adverse skin reactions during chickenpox.” It still recommends to never give aspirin to children with chicken pox and suggests paracetamol instead of ibuprofen as the painkiller during the disease.

After Hayley’s post on Facebook garnered so much attention, the National Institute for Health and Care Excellence issued a statement recommending ibuprofen no longer be used for chicken pox.