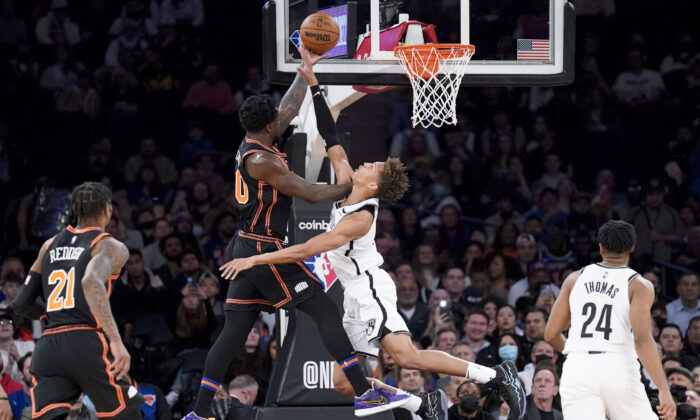 Nets rookie Cam Thomas came off-the-bench to score 16 of his 21 points in the fourth quarter in the comeback, which matched their largest rally in franchise history.

Missing for the Nets were superstars, Durant who has been out the last 16 games with a sprained left knee, and Kyrie Irving who is not allowed to play in New York City per vaccine mandate.

Per mandate, an unvaccinated out of town player can play in New York City, while a Brooklyn or New York player who is unvaccinated cannot.

NBA Commissioner, Adam Silver, said “The oddity of it is that it only applies to home players. I think if ultimately that rule is about protecting people who are in the arena, it just doesn’t quite make sense that an away player who is unvaccinated can play at Barclays, but the home player can’t.”

Silver hopes that new Mayor Eric Adams would change the vaccine mandate for local NBA players, but Adams responded that he’s “struggling with that.”

Thomas shot 9 of 21 from the field, adding four rebounds and two assists for the News; he was 7 of 10 shooting in the fourth-quarter comeback.

“I was struggling [early] tonight,” Thomas said. “I went like one for nine, [or] one for 10 to start. I wasn’t getting any calls, so I just had to play through it, keep playing. So I’m glad it worked out for us.”

Recently acquired last week at the trade deadline, Seth Curry, scored 20 points on seven of 14 shooting with six of nine from threes while adding six assists.

LaMarcus Aldridge also came off-the-bench for a big fourth quarter with 11 of his 18 points late, and 10 rebounds.

Julius Randle led the Knicks, scoring 31 points on 10 of 22 from the field; shooting four of eight from threes, and added 10 rebounds, three assists, and a block.

New York is the only team in the last 25 years to blow three 20-point plus leads in one month; two in the previous three games just having blown a 23-point lead at Portland on Saturday. They’ve lost 13 of their last 16 games.

“You get a big lead, you’ve got to play tough with a lead,” said Knicks coach Tom Thibodeau. “You have to understand how to play with a lead. We haven’t done that well.”

The Knicks started hot with a shooting 68.4 percent in the first quarter but missed 18 of 26 shots in the fourth to include making only one of 11 three-pointers.

After trailing the entire game, the Nets tied the game at 97, with 4:35 remaining, on two free throws by Thomas.

The Nets maintained a small lead late until Quickley made a six-foot floater driving to the basket, to get the Knicks within one, 104–103, with 1:10 remaining.

Thomas increased the lead with a 29-foot step back three-pointer with 7.7 seconds remaining, and Aldridge hit a free throw to end the game with a 111–106 victory.

“I think [Thomas] has a deep belief in his ability and I think he seeks those moments,” Nets coach Steve Nash said. “So that’s something that’s inside of him that’s rare.”

The Nets will host Washington on Thursday night; while the Knicks host Miami on Feb. 26 after the All-Star weekend.