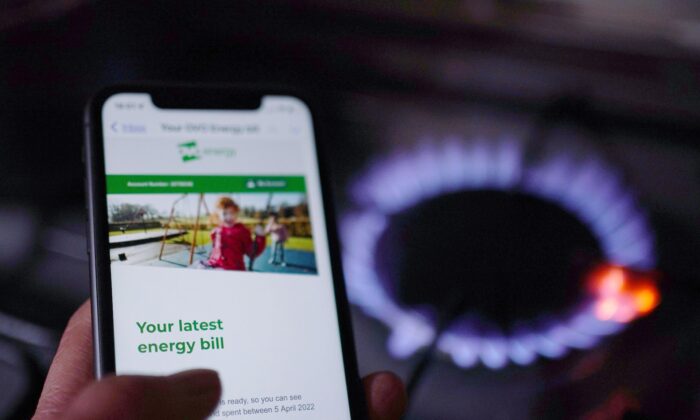 A household energy bill displayed on a mobile phone held next to a gas hob, in a file photo dated Aug. 25, 2022. (Yui Mok/PA Media)
UK

Nearly Half of UK Households Struggling to Afford Energy Bills

Nearly half of UK adults are finding it hard to pay their energy bills, new figures suggest.

According to the Office for National Statistics (ONS), 48 percent of British adults surveyed between Aug. 31 and Sept. 11 said they were finding it “very or somewhat difficult” to afford their energy costs.

It represents an increase from a fortnight earlier when 45 percent said they were struggling with energy bills.

But households have been promised support by Prime Minister Liz Truss’s new government since the start of the survey period.

Households had already seen their energy costs surge by 54 percent after the price cap for an average home increased to £1,971 in April.

Without the government help, average bills were due to rise to £3,549, according to estimates by industry regulator Ofgem.

The fortnightly ONS cost-of-living survey also revealed an increase in concerns from consumers over their regular spending.

Some 82 percent of adults surveyed reported “being very or somewhat worried about rising costs of living” in the past two weeks, edging up from 81 percent a fortnight earlier.

It was a significant increase from May when just 74 percent of people said they were worried about the cost of living.

Meanwhile, 26 percent of British adults said they are unable to save as much as usual.

The UK’s inflation rate fell from 10.1 to 9.9 percent in August thanks to a drop in fuel prices but still remains close to its 40-year record.

Due to high inflation, British workers’ incomes have been shrinking in real terms despite significant wage rises.

According to the ONS, though the average total pay (including bonuses) grew by an annual rate of 5.5 percent in the period of May to July 2022, the real-term pay fell by 3.6 percent year-on-year when inflation is taken into account.

According to research firm Kantar’s latest report, published on Sept. 13, grocery price inflation hit 12.4 percent during the past month, up from last month’s previous record of 11.6 percent.

Confidence among UK consumers has declined sharply, according to the Consumer Confidence Index from YouGov and the Centre for Economics and Business Research (CEBR).