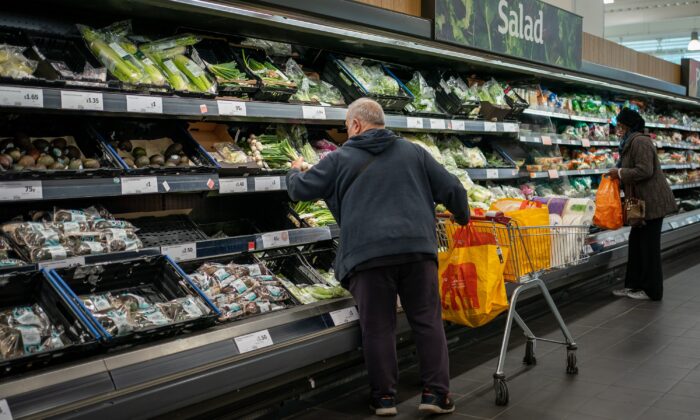 According to the latest data released by the Office for National Statistics (ONS) on Sept. 13, the average total pay received by UK workers, including bonuses, grew by 5.5 percent in May to July 2022.

According to the ONS, the average regular pay (excluding bonuses) rose by 5.2 percent from May to July 2022, but in real terms the actual pay fell by 3.9 percent owing to inflation.

This is slightly less than the record 4.1 percent fall seen a month earlier, but still remains among the largest falls ever seen since comparable records began in 2001.

The CPI inflation jumped to a fresh 40-year high of 10.1 percent in July as energy and food bills sent living costs racing higher.

As part of a package to tackle the cost of living squeeze, Britain’s new Prime Minister Liz Truss announced on Sept. 8 that the price of a typical British household’s energy bill will be capped at £2,500 ($2,933) a year for the next two years.

The scheme is on top of a £400 ($470) energy rebate that was already set to begin arriving in October, meaning bill sizes will remain largely unchanged this winter, depending on the amount of energy used.

The move is set to rein in the peak in inflation, but wages are still unlikely to keep pace with rising costs.

According to research firm Kantar’s latest report, published on Sept. 13, British consumers are now paying a record £571 ($670) more on average for their groceries than last year.

Grocery price inflation hit 12.4 percent during the past month, up from last month’s previous record of 11.6 percent.

Categories like milk, butter, and dog food are rising particularly quickly, at 31, 25, and 29 percent respectively.

“It seems there’s no end in sight to grocery inflation as the rate at which food and drink prices are increasing continues to accelerate,” said Fraser McKevitt, head of retail and consumer insight at Kantar.