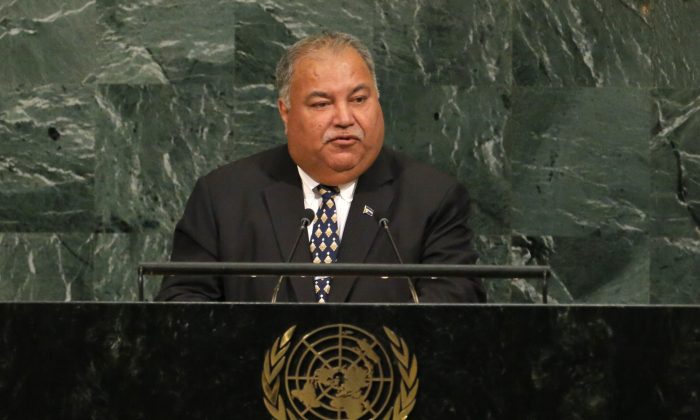 Nauru Demands an Apology from China for ‘Disrespect’ at Pacific Forum

WELLINGTON/SYDNEY—The tiny Micronesian state of Nauru is demanding a formal apology from China after a dispute with China’s representative at this week’s Pacific Islands Forum brought to the surface tensions with Beijing over its support for Taiwan.

Nauru, an island country of roughly 12,000 inhabitants, hosted leaders of 18 Pacific nations, plus delegations from non-member countries including the United States and China, for the forum.

The spat occurred on Sept. 4, when Nauru’s President Baron Waqa refused to give way after the head of the Chinese delegation, diplomat Du Qiwen, demanded to be allowed to address the forum before the Prime Minister of Tuvalu.

Waqa described China’s envoy as “very insolent” and a “bully” for speaking out of turn.

Nauru and Tuvalu are two of six Pacific countries that have diplomatic ties with Taiwan, which is a major source of tension with China. China regards Taiwan—which has its own democratically-elected government, military, and currency—as a wayward province that will one day be reunited with the mainland, by force if necessary.

During a media conference that followed the leaders’ meeting at the forum late on Sept. 5, Nauru’s president was asked whether he would seek a formal apology from China over its envoy’s behavior.

“We will go further than that, I tell you we won’t just seek an apology, we will actually get the forum to do it…as well as our own and we will even take it up to the UN,” Waqa said.

“Never mind they are big, they are our partners, they should not disrespect us,” he added.

“I wish to admonish Nauru and the director behind this performance that in the face of the broad historical trend of the ‘one China’ principle, they should immediately stop creating a scene for no reason and again invite humiliation.”

In an effort to delegitimize Taiwan, Beijing has pressured other nations to only recognize “one China”: the one ruled by the Chinese Communist Party.

Chinese state-run tabloid Global Times said in an editorial that the dispute was connected to Nauru’s recognition of Taiwan.

“Taiwan should not believe there is still an opportunity for its “diplomacy” just because of Nauru’s actions,” the paper said on Sept. 6.

Taiwan’s Foreign Ministry spokesman Andrew Lee told Reuters in a written statement that it was “basic etiquette” to respect the arrangement made by a host country in international conferences.

The ministry also thanked the support from Nauru, he said.

Waqa said that he had not allowed China to speak, as protocol dictated that he allow prime ministers and ministers to speak before diplomats.

“I have to be strong here because no one is to come and dictate things for us,” Waqa said. “It’s about the way they treated us, they’re not our friends. They just use us for their own purpose, for their own will.”

China has become one of the dominant economic players in the Pacific, spending billions of dollars in trade, investment, aid, and tourism in a region that Australia has long regarded as its “backyard.”

Chinese lending to the region has surged from nearly zero to $1.3 billion over the last decade, stoking concern that tiny nations could end up overburdened and in debt.

Tuvalu is set to host the Pacific Island Forum in 2019. Waqa said some states had suggested changing the rules around which forum events that countries with “’dialogue partner”’ status, including China, would be allowed to speak.