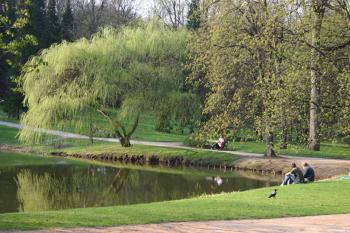 By Louise McCoy
Print
Should you hang a photo of a beautiful landscape or garden in your cubicle or office? If you would like to enhance your thinking and memory, this may be one way to go. Better would be actually going outdoors and walking around in a natural setting for about an hour, or is there a window with a view you can gaze out of?

If you are not fascinated with your work, and it is a mental struggle to keep focused, you are using directed attention that begins to falter after a while, either being tinged with irritation or interrupted with other thoughts, food, for instance, or other annoyances.

At this point you need Attention Restoration Theory (ART) to regain focus. At Michigan University, Ann Arbor, researchers are nailing down, with studies, what some people instinctively know but couldn’t put into numbers.

The three restoratives of ART are:
•    Change of environment, preferably to one in nature, but could include a social or recreational one that we choose
•    Fascination or keen interest in a subject
•    Keeping one engaged for long periods of time without boredom

Psychology department researchers Stephen and Rachel Kaplan, from the School of Natural Resources and Environment of Michigan University, Ann Arbor, theorized that life would be satisfying if one could understand and explore one’s environment, have an impact, and feel competent and effective.

Joining the Kaplans were psychology researchers Marc Berman and John Jonides, who set up a study wherein the participants either took a walk in a natural setting or city streets and tested their memory and attention ability afterwards. Those taking walks in natural settings, such as parks and gardens, consistently scored 20 percent higher in attention and memory tests than those walking in the city. These scores held no matter what the weather conditions, or whether the participant enjoyed the walk or not.

Bernadine Cimprich, Ph.D., R.N., also from the University of Michigan, studied women who knew they had breast cancer both before treatment and after surgery, whose minds were preoccupied with life and death. They had trouble planning, making decisions, and focusing attention.

Randomly selected participants improved their capability in all three of the above after choosing a way of relating to nature such as bird watching or gardening and signing an agreement to do it for half an hour three times a week. Their abilities in attention focusing continued to improve, while the controls did not.

There was a naturalist, who when out in the field, would have a beer or so a day, but when he lived in the city or a sterile condominium, became an alcoholic. There was a man depressed after hospital treatment, thinking he had no future, but he found he had a talent for making bonsai. There must be endless examples of the healing of Mother Nature.

Taking time to visit a park may leave you a little more relaxed
nrpa.org/content/default.aspx?documentId=3762