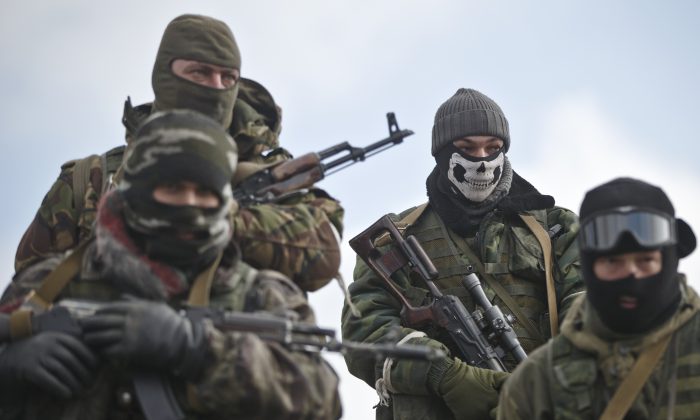 NATO: Risk of Return to Heavy Fighting in Ukraine

BRUSSELS— Warning of a return to heavy fighting in eastern Ukraine this summer, NATO on Thursday blamed Russia and outlined additional support for Kiev, including aid in defusing roadside bombs.

NATO Secretary-General Jens Stoltenberg said the alliance is creating a new trust fund that will help with removing mines and detecting and destroying improvised explosive devices. Those steps, he said, will be vital for saving lives in a conflict that has killed more than 6,000 people.

In addition, he said, NATO is working to better secure the airspace in the region. He said Poland, Norway and Turkey will be sharing more airport traffic control data with Ukraine, which is critical because it’s “an area which is unstable and where we see fighting going on, on the ground.”

His comments came as the U.S. and other allied defense ministers met to hammer out additional ways they can bolster Ukraine’s defense while still refusing to provide lethal weapons to the country, under siege since Russia annexed its Crimea region last spring. The U.S. and the West have criticized Russia for its increasingly aggressive actions, including its backing of separatist troops on Ukraine’s eastern border, which Moscow denies.

Stoltenberg told reporters that Russia continues to support pro-Moscow separatists “with training, weapons and soldiers,” a charge the Kremlin also denies. And he said the Russian military has stationed “large numbers of forces” on the border with Ukraine.

U.S. Defense Secretary Ash Carter, traveling across Europe this week, has rolled out plans for the Pentagon to provide additional military assistance to Europe, to help reassure allies who feel threatened by Russia’s aggression as well as terrorist groups including the Islamic State.

He told allies the U.S. will spread about 250 tanks, armored vehicles and other military equipment across six former Soviet bloc nations, and will also be willing to provide, when needed, weapons, aircraft and forces, including commandos, to supplement NATO’s new very high readiness task force.

Asked about the reasons behind the new plan to make Ukrainian airspace more secure, Stoltenberg did not draw a direct link to Malaysian Airlines Flight 17, the airliner shot down last summer over eastern Ukraine, killing all 298 people aboard.

Ukraine and the West believe the jet was destroyed by a Russian surface-to-air missile fired by Russian soldiers or Russia-backed separatists fighting in the area. Russia denies that.

During the NATO meeting, allies have insisted they are not looking to restart a Cold War-style arms race with Russia, but are working to address the threats that alliance nations are facing.

As a result, they have announced that they will increase the strength of the alliance’s Response Force, which was 13,000 at the start of 2015, to as many as 40,000. And they added air, sea and special forces units to the force, which includes a highly mobile, multinational “spearhead” brigade of 5,000 ground troops the ministers ordered formed in February so NATO can reinforce any alliance member under threat within 48 hours.

Ministers also made it simpler and quicker for NATO generals and civilian officials to mobilize the force and bring it into action, Stoltenberg said. In addition, he said NATO will develop more detailed advance plans to use in the case of crisis, and that a new joint logistics headquarters will be opened to help the NATO force deploy faster with the gear and supplies it needs.