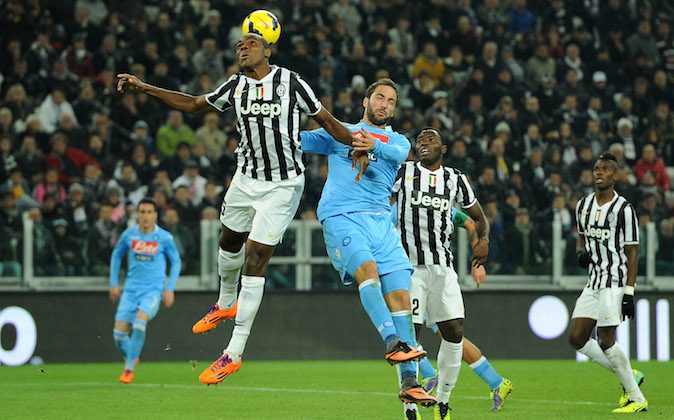 Angelo Ogbonna (L) of Juventus goes up with Gonzalo Higuain of SSC Napoli during the Serie A match between Juventus and SSC Napoli at Juventus Arena on November 10, 2013 in Turin, Italy. (Photo by Valerio Pennicino/Getty Images)
Soccer

The game will also air on beIN Sports USA, RAI International, and beIN Sports en Español in the United States.

Here are 2 AP columns on the match.

Juventus travels to Napoli on Sunday without the league’s top scorer Carlos Tevez.

Tevez, who scored twice against Parma to take his tally for the season to 18, also picked up a booking and will be suspended for the match.

“I am sad about that, because I won’t be with my teammates,” Tevez said. “And to think that Conte wanted to replace me just before I picked up that yellow card. … I always want to play and score in every match but at least I’ll be able to rest and prepare for Thursday’s (Europa League game).

“I am certain it will be a great match, Napoli is playing good football and the atmosphere will be heated.”

Napoli beat Catania 4-2 on Wednesday to reassert its claim for third spot and the final Champions League spot after the disappointing loss to Fiorentina at the weekend.

It moved 10 points above fourth-place Fiorentina which fell to a surprise defeat at home to AC Milan.

Coach Rafa Benitez says Roma is in now in his team’s sights, despite a six-point gap to the capital club, which have played a game less.

“I was an important win, our aim remains second place,” Benitez said. “Our target continues to be Roma, but it depends on them too. We will try to give our all and we can close the season brilliantly. We should have confidence because there are still 24 points available.”