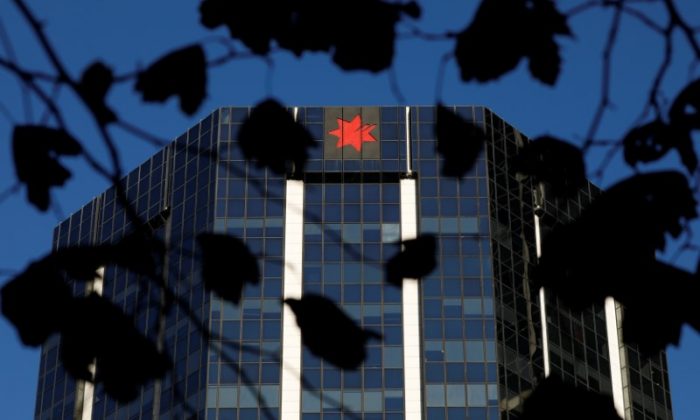 Bank of Queensland (BOQ) has signed a $1.325 billion deal to acquire ME bank on Feb 22, paving its way to challenge the big four dominance. (Reuters/Edgar Su)
Australia

Kenneth Hayne’s final royal commission report—made public on Feb. 4—expressed serious concerns about their leadership of the bank and failings that included charging fees for no service.

“Andrew and I are deeply sorry for this. My decision is not made in reaction to any specific event, but more broadly looking at the bank’s needs in coming months and years,” Dr Henry said in NAB’s statement to the ASX after trading closed on Feb. 7.

Statement: Ken Henry and Andrew Thorburn out at NAB pic.twitter.com/cBaNLfJuoO

NAB shares had been placed in a trading halt before an announcement about “leadership changes.”

Chief executive since August 2014, Mr Thorburn had been keen to continue but by Feb. 7 he accepted he had to go.

“I acknowledge that the bank has sustained damage as a result of its past practices and comments in the royal commission’s final report about them,” Mr Thorburn said in the statement to the ASX.

“I recognise there is a desire for change. As a result, I spoke with the board and offered to step down as CEO, and they have accepted my offer.”

Mr Thorburn said he had “always acted with integrity” and in the best interests of the bank and customers.

A message to our customers: We understand earning your trust is not about words, it’s about action. And we’re determined to show you how we’re changing to be a better bank. pic.twitter.com/TuASiN4ylk

He will finish at NAB on Feb. 28, while Dr Henry indicated he would retire from the board once a new permanent CEO had been appointed.

Dr Henry, a former head of Treasury who had been chairman since 2015, has been under pressure since a brusque performance at the royal commission in which he seemed reluctant to answer some questions.

“This is naturally a difficult decision but I believe the board should have the opportunity to appoint a new chair for the next period as NAB seeks to reset its culture and ensure all decisions are made on behalf of customers,” he said.

Philip Chronican, a current NAB director with extensive domestic banking experience, will serve as acting CEO from March 1 until a permanent appointment is made.

Mr Thorburn’s future had been subject to speculation since he announced surprise plans to take leave around the release of the Hayne report.

He was also shaken last year by allegations an employee he considered a friend was involved in a multimillion-dollar fraud against the lender.

Since replacing Cameron Clyne as CEO, Mr Thorburn had overseen the divestment of the bank’s unprofitable Clydesdale Bank and 80 per cent of its MLC wealth management business and embarked upon a A$1.5 billion ($1.06 billion) restructure that will trim 4,000 jobs over three years.

But NAB shares have fallen 26 per cent during his tenure and he took a A$2 million ($1.42 million) pay cut in the last financial year after the lender’s full-year cash earnings fell 14.2 per cent and the bank owned up to its poor treatment of customers.