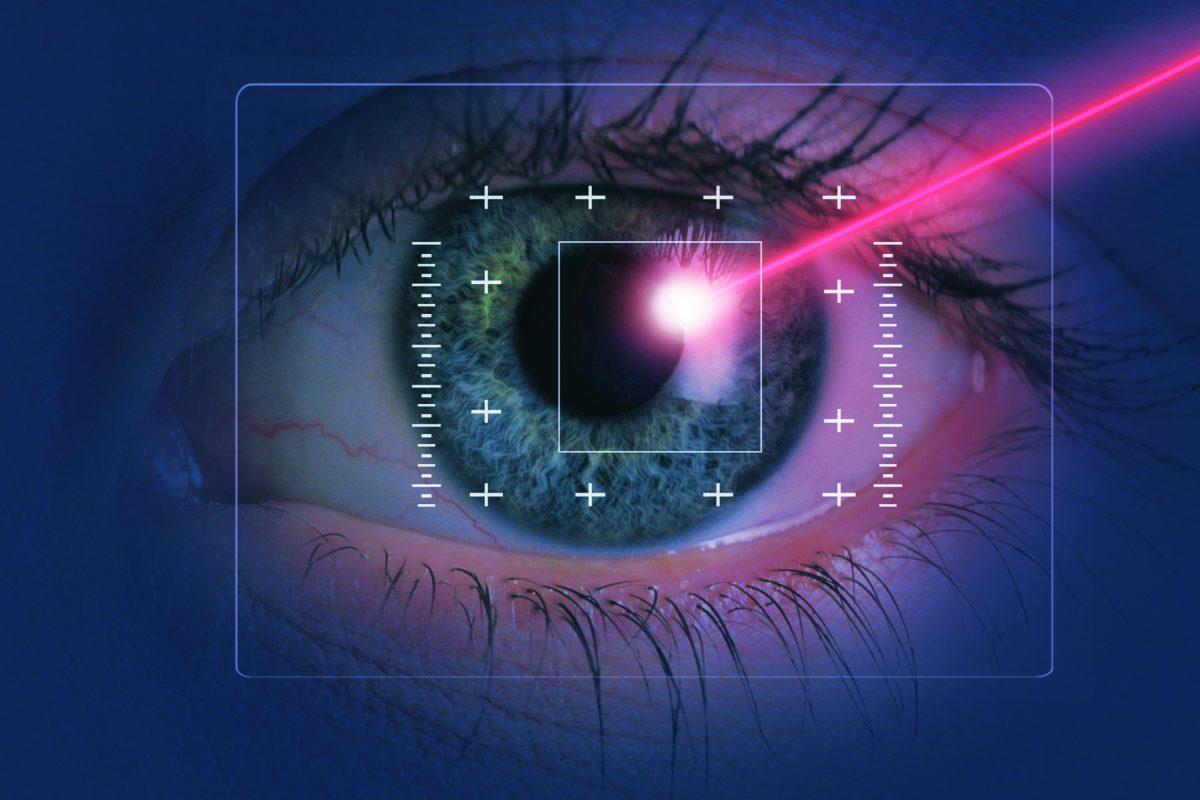 Refractive laser eye surgeries reshape the cornea with the use of a laser to improve vision. (Comstock/photos.com)
Eye Health

Myopia Laser Surgery: Sight Restoration or Blindness? What the Experts Aren’t Telling You

Myopia does not necessarily require a lifetime of wearing glasses. Nowadays, there is a way to restore normal vision–myopia laser surgery. However, in recent years, there has been a growing controversy regarding this type of surgery. Many studies and cases have shown that it may cause some people to lose their vision instead of gaining it, and it may even bring excruciating side effects.

After Paula Cofer underwent myopia laser surgery in 2000, her eyes became extremely dry and started to have a burning sensation. She has also been suffering severe nighttime vision loss, and was left with chronic pain. She has since posted many cases of severe complications from laser surgery on her website and Facebook page.

Several of the more common complications of myopia laser surgery include glare, night vision loss, and the dry eye syndrome. However, in some cases posted on Paula’s website, people have lost their vision, become disabled, or even committed suicide because of the prolonged pain.

One such case involves Ms. Weber. After undergoing myopia laser surgery in 2017, she developed severe dry eye symptoms and has been confined to her dim residence. She has to wear a hat and special glasses to go out. She was declared permanently disabled and unable to work at the age of 30.

Many believe that these are just a few cases. After all, there are risks associated with any kind of surgery.

In 2009, the Food and Drug Administration (FDA), the National Eye Institute (NEI) and the US Department of Defense (DOD) launched the LASIK Quality of Life Collaboration Project (LQOLCP) to understand the potentially serious risks associated with this type of surgery.

In reports of controversies surrounding myopia laser surgery, FDA officials have consistently responded that less than 1 percent of patients who undergo the procedure experience long-term complications.

The Controversy over Myopia Laser Surgery

However, former FDA official Dr. Morris Waxler told Healthline that this is a misrepresentation. He served as an FDA reviewer until 2000 and voted to approve myopia laser surgery in 1998. Over the years, however, he has turned to warning people about the risks and long-term side effects of myopia laser surgery.

Waxler pointed out in a submission he made to the FDA in 2019 that the Summaries of Safety and Effectiveness Data (SSED) submitted to the FDA by the manufacturer showed a double-digit percentage of myopia laser surgery patients experiencing persistent complications 6 to 12 months after surgery.

At the time, he cited the long-term risks associated with the procedures. For example, many patients, who had undergone laser eye surgery in those years, had significant rapid vision loss more than a decade after surgery, which greatly affected their daily life and work. He researched and concluded that it might be related to the inflammation of the corneal flap after the surgery.

Another reason is that patients, who returned to the clinic years later, found that their corneal flaps cut during the surgery did not heal. Patients would return for help due to shifted corneal flaps caused by minor accidents, such as being hit in the eye by a dog or a child.

One of the mainstream methods of myopia laser surgery is LASIK (Laser-Assisted in Situ Keratomileusis).

LASIK is a procedure in which the cornea of a myopic patient is circumferentially cut, to create a flap, which is then lifted up. The largest part of the stromal layer of the cornea is then cut with an excimer laser, and the corneal flap is finally covered back in place. As the cornea has become thinner and the focal length shorter, the incoming light can be focused on the retina to correct myopia.

LASIK was developed in the 1990s and has indeed allowed many people to successfully remove their glasses. However, for years after the surgery, the corneal flap that is cut during surgery does not heal tightly to the cornea and can be displaced by touching, hitting, or rubbing the eye vigorously.

In addition, some complications are thought to be related to the corneal flap and corneal thinning. For instance, severe pain in the eye, like being pricked by a pin or stabbed by a knife.

In a study published in 2015 by Dr. Anat Galor, associate professor of clinical ophthalmology at the Bascom Palmer Eye Institute, University of Miami, and several other experts pointed out that there is a growing awareness that LASIK surgery is known to cause damage to the corneal nerves because of the corneal flap cutting. The persistent eye pain experienced by some patients after myopia laser surgery may be due to damage to the corneal nerves.

In some patients, these neuropathological changes may be responsible for some of the prolonged dry eye symptoms after laser surgery.

Dr. Cynthia MacKay, who received an honorary award from the American Academy of Ophthalmology, is one of the few ophthalmologists who have publicly opposed the procedure, saying that it breaks tiny corneal nerves, thins and weakens the cornea, and permanently changes the shape of the eye.

She told the New York Times that after laser surgery, everyone loses contrast sensitivity, as in the ability to distinguish between shades of gray, to some degree.

A 2018 article in the BMJ Open Ophthalmology mentions that complications such as post-LASIK epithelial ingrowth (PLEI) may occur between the corneal flap and the underlying stroma.

The incidence of corneal epithelial ingrowth after the first LASIK surgery ranges from 0 percent to 3.9 percent. The rate increases to 10 percent to 20 percent if the laser surgery is repeated due to conditions such as failure to achieve the desired degree of correction.

Another rare but serious complication is corneal ectasia. After surgery, the thinned cornea may not be able to withstand the intraocular pressure, resulting in a steepened or bulging corneal surface and vision loss. Scott Petty of Houston was diagnosed with corneal ectasia six months after laser surgery, and his vision continued to deteriorate even after treatment. It was so painful, like having hot grease in his eyes, that he almost committed suicide.

Is the Latest Technology Safe?

The controversy and concerns about these complications are viewed differently by some.

For example, Dr. Roy Rubinfeld, a refractive surgeon practicing in Rockville, Maryland, told TV Today that he trusts the procedure so much that he, his wife, and his daughter had all undergone myopia laser surgery. He believes that complications from myopia laser surgery were more common in the early days, but that the surgical equipment and technologies have come a long way.

The latest myopia laser surgery is the small incision lenticule extraction (SMILE) procedure, which was approved by the FDA in 2016.

This latest technology does not require a corneal flap to be cut out, and the wound is only 2mm to 4mm, much smaller than the LASIK wound (20mm). The corneal surface is where the nerves are distributed, so cutting the cornea will definitely damage the nerves. However, the relatively small SMILE surgical wound should cause less damage to the corneal nerves. Therefore, ophthalmologists expect SMILE to be more advantageous than LASIK, while having similarly excellent correction results.

However, some people who received SMILE surgery have still experienced some serious side effects. In late 2018, Jessica Starr, a meteorologist for a Detroit television station, committed suicide two months after undergoing SMILE surgery.

A month before her suicide, Jessica published a video on Facebook stating that she had dry eyes and blurred vision as a result of the SMILE surgery. Her husband stressed that Jessica was healthy before the surgery, with no depression or any underlying problem.

After Jessica committed suicide, Dr. John Vukich, an ophthalmologist and chairman of the Refractive Surgery Clinical Committee for the American Society of Cataract and Refractive Surgery, told the Detroit Free Press, Detroit’s largest daily newspaper, that SMILE surgery is “fundamentally the same” as LASIK and that both are very safe.

Vukich, who had undergone myopia laser surgery himself, added that it is a surgery that has improved the lives of many people, but like in any surgery, there is no such thing as zero risk.

Regarding the risks of the SMILE procedures, it will take time to verify them. Some new studies have discovered that even with the latest technology, the risks of corneal nerve damage and possible corneal ectasia cannot be ignored.

A study published in the Journal of Refractive Surgery in 2020 showed that the myopia laser surgical effects on the corneal nerves are long-lasting. Although the SMILE surgery has better nerve preservation and regeneration results than LASIK, neither procedure restores the corneal nerves to normal levels even five and a half years after surgery.

The February 2022 issue of Optometry and Vision Science documented a case in which a young woman became pregnant 11 months after she had a SMILE surgery. She developed blurred vision in early stages of her pregnancy, and she was diagnosed with corneal ectasia two years after surgery.

In addition, an in vitro study in 2017 found that the SMILE procedures are not safer than LASIK and may even be less safe than LASIK in low myopic correction.

‘If You’re Not a Risk Taker’

Myopia laser procedures have been developing for more than two decades, and critics of the surgery continue to make their stance heard.

Most people may be the lucky ones with no serious, painful complications after surgery. However, these people may still face the possibility of having to wear glasses or contact lenses again, especially in dim conditions or as they age.

The FDA warns that people who are considering laser myopia surgery should be aware of several things. These include that multiple surgeries may be required to achieve the desired results; the results may not last; the long-term results of the surgery are unknown; and there may be additional risks associated with simultaneous surgery on both eyes.

Is the low risk something we can afford? Most people would reconsider their options after learning about the risks; after all, each person has only one pair of eyes.

For this reason, the FDA has a separate web page on “When is LASIK not for me?” It is stated in this section that “you are probably NOT a good candidate for refractive surgery if you are not a risk taker. Certain complications are unavoidable in a percentage of patients, and there are no long-term data available for current procedures.”