Musicians Say Shen Yun Is a Treat to See and Hear 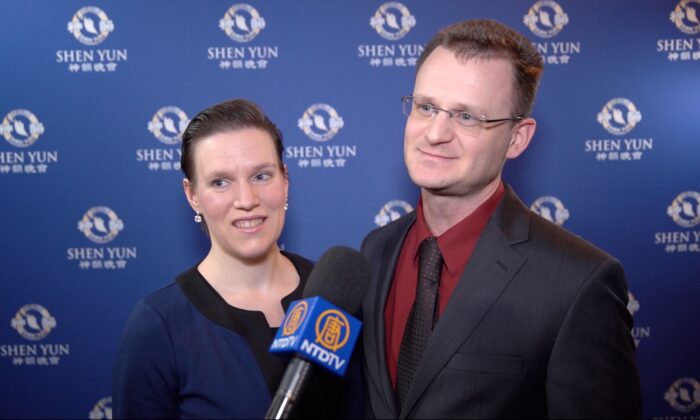 DETROIT—A couple with musical backgrounds saw Shen Yun Performing Arts, and found the performance to be in perfect harmony.

Crystal Rumbell currently teaches band at a private school and has formerly taught both instrumental and choral music for Wayne-Westand Public Schools. John Rumbell, an amateur bass trombone player, is an engineer for DF Automotive. Both agreed that the compositions of the music and the choreography of the dances fantastically complement each other.

Shen Yun is a New York-based company that seeks the revitalization of traditional Chinese culture and does through music and dance in performances in over 100 cities around the globe every season.

“It’s amazing to hear the blend of Western and Eastern culture in the music and also see it on the stage and the dancing. It’s just, it’s beautiful, and it’s a treat to see it as well as hear it,” Crystal said.

It was an artistic experience Crystal wanted to share with her students.

Crystal said she feels responsible to help broaden the perspectives of her students, and open their minds and ears to unfamiliar things, and realize what the world and other cultures have to offer. “This is such a great way to show that, so I’m really glad that Shen Yun is here,” she said.

“It goes across cultural lines. It goes across musical minds, it opens your mind. And it really helps, especially in one of the dances they showed what different cultures are experiencing across the world and how music is a bomb for what’s going on as well. I think everyone needs to be shown exactly how that works,” she said.

Being an amateur musician as well as one who comes from a musical family, John has a certain insight.

He explained that he particularly noticed this synchronicity during one vignette showing the Mongolian ethnic dance.

“Both halves of the story coming together very seamlessly, very flawlessly. And it was a real treat to hear that and to see it all just come together as one,” he said.