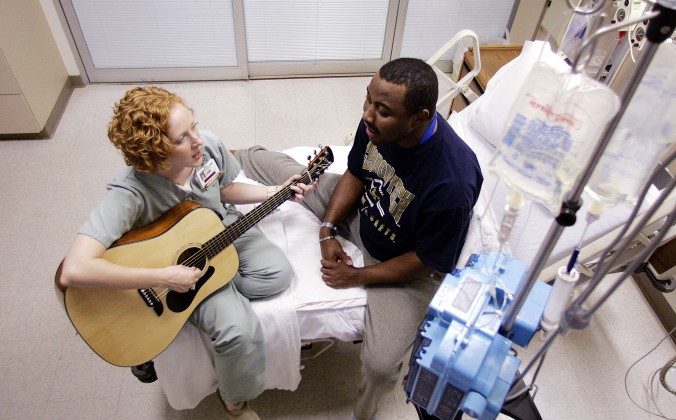 A hospital music therapist plays her guitar and sings along with a patient at a hospital in Atlanta in this file photo. Music therapy can be deep and emotionally healing. (AP Photo/Dave Martin)
Alternative Health

When a 9-millimeter bullet ripped through U.S. Rep. Gabrielle Giffords’s skull and tore across the left side of her brain, it caused extensive damage in the part that controls language. After the attempted assassination, she lost her ability to speak.

Although Giffords couldn’t say the word “light,” she could sing “This little light of mine, I’m going to let it shine.”

With guidance from a music therapist, Giffords was able to rewire her brain. Music involves both hemispheres, and singing allowed her to build a speech center on the undamaged side—something that no drug can do. Although Giffords is not as eloquent or talkative as she once was, she has recovered her ability to speak.

Giffords’s speech recovery is not unique. Since time immemorial, cultures around the world have used music to heal. In Chinese, the character for medicine evolved from the character for music, and in Chinese medicine, different tones are seen to correspond with different organs and body systems.

Although using music for therapy is far from standard practice in much of modern medicine, it has been accepted for decades with the first academic program to train music therapists established in 1944 at Michigan State University. But music therapy gaining traction as research continues to show its value for everything from weight loss to psychological disorders, to cancer.

It can also help premature infants improve sleep patterns and gain weight. Jayne Standley, a professor of music with a courtesy appointment in the college of medicine at Florida State University, found in her research that if premature babies were given a device that played lullabies triggered by their sucking, they left the ICU 11 days earlier on average compared to preemies who did not have access to music.

According to the National Institutes of Health, music can assist with various kinds of recovery and is a “low-cost intervention that often reduces surgical, procedural, acute, and chronic pain.”

A report published in the Journal of Music Therapy in 1993 said that listening to music can also decrease cortisol, a hormone that in high levels causes the body to build up belly fat.

Music therapy treatments range from listening to music, to singing and songwriting, and even moving to music, depending on what an individual needs.

Those Who Can’t Speak

Jacqueline Birnbaum, a senior music therapist at the Nordoff-Robbins Center for Music Therapy at New York University, who specializes in helping children and developmentally delayed adults, said music can help those who can’t speak learn to interact and develop communication skills.

“A child may be non-verbal, but you can have a conversation in music,” Birnbaum said.

For example, children can learn to copy a rhythm, and then take the lead in playing while the therapist copies them. She emphasized, though, that music is not a miracle pill for her clients. It is a tool that allows them to increase their capacity for expression.

“We don’t cure people necessarily, but we try to develop their potential,” she added.

Music from our pasts can also connect us to long-term memory. Especially for people with severe dementia, music can activate emotions and memories that are otherwise lost.

Dan Cohen, a social worker and  founder of the nonprofit Music and Memory, which brings seniors the music they love most through personalized iPod playlists, said music can calm seniors with dementia, reducing the need for sedative drugs and helping them reconnect with loved ones.

“Music can be an acceptable substitute for often harmful antipsychotic medications,” he said. “You may no longer recognize your family members … but the music helps you [recall forgotten memories], reminisce, and keeps you interacting with people around you.”

Listening to a personalized playlist made a big difference for Dave Roth’s elderly mother, who suffered from Alzheimer’s. In her early 80s, the disease had progressed to the point that she was only able to make four utterances, Roth recalls. But when he had her listen to recordings of her favorite religious music, she was able to sing along with the lyrics.

Research shows that music therapy can also serve as a complementary treatment for cancer patients.

A study conducted by the University Hospitals of Cleveland found that music therapy can influence biological responses such as heart rate and blood pressure and can increase immune function. It can also reduce anxiety and distress and help manage of pain and discomfort.

Maria Logis was diagnosed with stage-4 non-Hodgkin’s lymphoma almost 20 years ago and later with thyroid cancer. She is currently in remission from both cancers, and while she did need surgery on her thyroid, she never had to undergo chemotherapy or surgery for her lymphoma.

Logis attributes her recovery to a variety of factors, including dietary changes, and said music therapy has certainly helped. She said her music therapist, whom she’s been seeing since she was first diagnosed with lymphoma, helped her feel positive emotions during a very dark time.

“The first time I saw him, it was fun. It made me laugh,” she said.

“I was in such a state of worry and anxiety and fear and despair that laughing for even a few minutes helped to break this terrible black cloud that I was under,” she said.

The sessions also gave her emotional resilience. “The next time I met with him, I cried and cried and cried. I let out my feelings of being afraid of doctors and treatments,” she said. “Music therapy is a deep, emotionally healing process.”

June Fakkert contributed to this report.