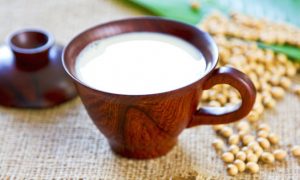 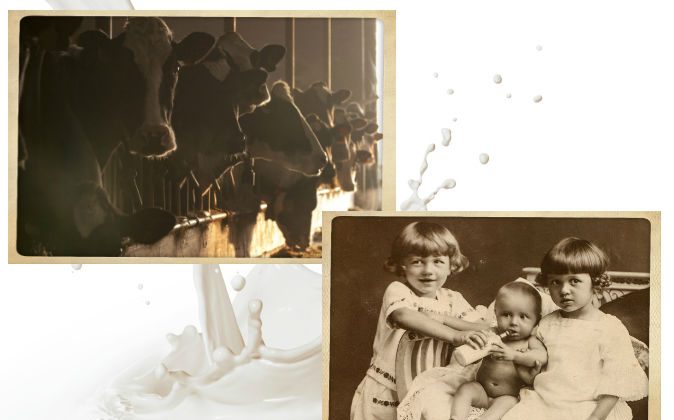 Right: A baby drinking milk in the 1920s, at a time when pasteurization had already become popular but its pitfalls were still widely discussed. (Shutterstock*) Left: A file photo of a dairy farm. (Shutterstock*) Background: Milk (Thinkstock)
Fitness & Nutrition

The vast majority of milk consumed in the world today is pasteurized, even though it is less nutritious after pasteurization and it’s harder to digest. So why do we pasteurize? To answer that question, we will time travel to New York in the 1890s. Let’s rediscover the controversies of milk as we now know it (pasteurized) and the stories of the men who made it—the communist Abraham Jacobi, the entrepreneur Nathan Straus, and educator Henri L. Coit.

Consumers mistrusted the heated stuff, because it had no cream layer. A thick cream layer let the consumer know the milk was of high quality. A thin cream layer signaled that the milk could be diluted or less nutritious. With pasteurization, consumers were suddenly dependent on the claims of milk-sellers concerning the milk quality and safety. The first pasteurized milk was sold cheaply or given for free to get people to drink it.

Government regulators saw milk pasteurization as an alternative to educating the whole dairy industry to follow safe practices and an alternative to combating the common practice of milk dilution. Milk was often diluted with unsanitary water. New York alone depended on thousands of milk farms delivering to the rapidly expanding city. Clearly, it was much easier and cheaper to regulate a few pasteurization stations.

Some credit pasteurization with a significant drop in child mortality rates of 24.6 percent in New York in the 1880s, according to medical information website Neontology on the Web, run by Ray Duncan, MD.

Wholesalers welcomed the improved shelf-life and profitability of pasteurized milk over the hassle of fresh milk, which turns sour in a few days.

Jacobi was an influential pediatrician in New York (he’s even been called the “father of American pediatrics”) and he was one of the first major advocates for milk pasteurization.

Jacobi had quite a surprising criminal record. German by birth, Jacobi fled his country to avoid arrest for high treason for his role in the 1848 German Revolution. On his journey to New York, he met Karl Marx and Friedrich Engels in England. He corresponded with Marx up until the 1870s and co-founded the first Communist Club of New York. He renounced his communist ideals later in life.

Jacobi’s reasons to advocate milk pasteurization may have stemmed from a genuine concern for children’s health. But they may also be linked to his communist beliefs. Milk pasteurization is actually an integral part of Marxist milk production units. Marx talked about agricultural “giants” of “large scale social production.”

At a dairy giant, cows are seen as “units of production” in this communist ideology and cannot graze outside; instead, they are fed cheap food like corn stalks or soy. The lack of nutrients makes the cows ill. They are fed antibiotics to suppress the illnesses. Sick, malnourished animals produce milk of low quality, lower nutritional value, and low pathogen resistance. In contrast, hygienically handled, fresh milk from healthy cows can battle listeria infection or parasites. But milk from dairy giants should be pasteurized to lower pathogens content. Thus, dairy giants produce more milk of lower quality as compared to fresh milk from traditionally raised, healthy cows.

Like Jacobi, Straus is lauded by those who see milk pasteurization as having reduced child mortality rates. In 1892, an entrepreneur, Straus answered Jacobi’s call for an investor in pasteurized milk (albeit about a decade after Jacobi first sought an investor).

Critics of pasteurization say Straus timed this big push forward to make it seem that pasteurization could decrease child mortality rates. Straus made his investment just one year after New York’s Croton Water Reservoir expanded to provide fresh water to long-under-served parts of the rapidly expanding city. Similar expansions of clean-water access in England had greatly curbed child mortality rates over the past decade. A renewed fashion for breastfeeding over bottle-feeding also showed potential for curbing infant mortality rates.

Straus pushed for global mandatory milk pasteurization, and his success in this campaign amassed for him great wealth and power.

Coit was a pediatrician, and also a father who was concerned about the milk his son was drinking. He investigated the processes by which milk arrived at his family’s door and found that his ill milkman handled milk unhygienically out of ignorance and thereby created a health hazard for his family. This drove Coit to take the long, difficult path toward cleaning up New York’s milk industry.

He started educating farmers on sanitation and hygiene and set up the first accreditation and certification system for fresh milk, making available fresh, healthy, unpasteurized milk to those willing to pay a bit more for it. A few years after the milk depots started, in the beginning of the 1890s, Coits-certified milk was available for those who could afford to pay a bit extra for healthy milk.

Knowledge about the importance of agricultural and food hygiene for human health was a relatively new concept at the time. Robert Koch had only recently discovered how bovine tuberculosis could be transmitted to humans: milking sick cows with dirty udders contaminates the milk and transfers the disease to the person drinking that milk.

Coit did not share a belief common in the medical community at the time that the human body is inherently sterile and that all bacteria, including those naturally present in milk, make people ill. He was of the opinion that pasteurization killed more than pathogens. Prolonged and excessive heating of milk destroys naturally present enzymes in milk essential to building up a healthy gut bacteria system. Fresh milk can be used as a probiotic. For example, the enzyme lactase (which helps to digest the milk protein lactose) is destroyed by heat.

Fast forward to the present day. Times have changed since the days of Jacobi, Straus, and Coit. Now milk certification is much more feasible. The logistics and regulatory capacity of Western countries have improved to facilitate a return to fresh milk for interested consumers. Now, raw milk raised in clean conditions can last up to 3 weeks in our fridges.

Advocacy organization Real Milk estimates 10 million Americans make the effort now to buy raw, fresh, organic milk directly from farms, and the number is growing. More and more people are demanding legal sales of fresh raw milk to feed their babies and children. They want it for the effects it has been seen to have in counteracting degenerative diseases, allergies, food intolerances, bone and teeth deterioration, and behavioral and moral problems. They especially seek it when expecting a baby or breastfeeding.

You can check the Real Milk website for more information on where to get fresh milk and studies on (pasteurized) milk. This presentation gives you an overview of available fresh milk research. Look for the study on how raw milk eliminates added pathogens naturally. And you can listen here to a 3 minute interview with Weston A. Price Foundation president and author of best seller ‘Nourishing Traditions’ Sally Fallon on Sky radio (August 9, 2007) on raw milk and children.

The institutionalized habit of heating milk before drinking it has become ingrained in many societies over more than a century. Learning the history of how and why it was established can help the modern consumer make informed decisions on the benefits or pitfalls of either pasteurized or non-pasteurized milk.