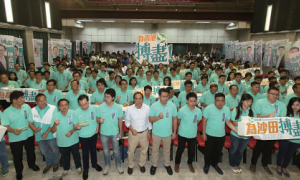 Mr. CY Leung and Little Miss Carrie Lam Are Too Cute and Cuddly to Hate

It might be a gross understatement to say that Hong Kong Chief Executive Leung Chun-ying and his chief Carrie Lam are not well-liked by Occupy Central protesters and neutrals, but it would be tough to find someone who won’t chuckle at “Mr. 689” and “Little Miss Lam Cheng.”

The picture books were eventually turned into a cartoon series.

In an interview with Coconuts Hong Kong, Ip said that the Hargreaves books are “excellent for children” because they can “learn about shapes, colors, clothing, and emotions through the characters,” and also because they are “full of positive energy,” something the Hong Kong people “need now.”

Check out some very real people playing key roles in the Occupy Central story done up by Ip in the style of Hargreaves’ iconic artwork:

“689” refers to the number of votes Leung got in the 2012 Hong Kong Chief Executive elections from the 1,200-member pro-Beijing Election Committee.

Leung is depicted as a wolf, probably because his last name is phonetically similar to the animal.

Of course, there’s also the “wolf in sheep’s skin” reading, as Hongkongers believe that Leung is secretly an underground member of the Chinese Communist Party.

Steve Hui got his moniker because he appears on the television at 4:00 p.m. daily to give a report on the protests.

This picture is a reference to Chow and Shum’s supposed “bromance.”

Maxwell Ip doesn’t intend to make any political statements about the protests with his illustrations.

In fact, Ip wrote on his Facebook page that he will not caption the pictures so that people can interpret in any way they wish, and hopes that they can be used to better explain the events in Hong Kong to little kids and people around the world.

I don’t know about you, but I’m personally very interested to hear the story of Mr. Rubbish Bin, Little Miss Lam Cheng, and Mr. 4PM!