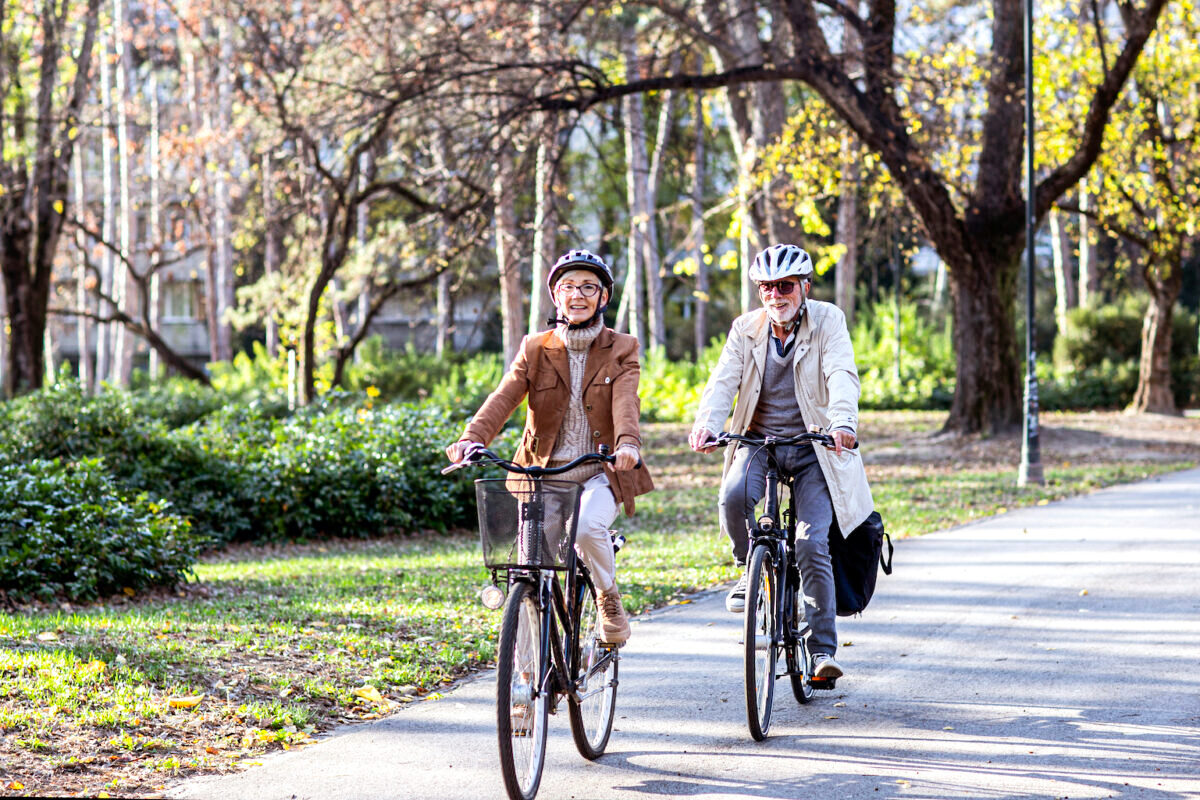 "If going to the gym doesn’t sound appealing, enjoy the world with a slow, easy bike ride instead. "(Zoran Pucarevic/Shutterstock)
Fitness

Focusing on moving more throughout the day as opposed to structured exercise is more likely to produce sustainable weight-related benefits in older adults, a new study found.

The report in the journal Obesity was the first to show that being on a dietary program and moving often during the day gives similar short-term weight loss and better long-term weight maintenance, compared to being on a diet and regular aerobic activity.

The researchers looked at 183 obese men and women between the ages of 65 and 85 before and during the pandemic, over an 18-month span. They were randomized into a group-based dietary weight loss program along with one of three exercise programs including SitLess (which encouraged them to move frequently during the day), only doing aerobics, or a combination of both. The scientists issued and a mobile health application to monitor their activity.

Researchers found that all groups lost weight over six months. But over the 12-month follow-up period, those who had added aerobics had greater weight regain compared to those who did the SitLess method.

“This research is relevant for clinicians and other healthcare providers interested in supporting long-term weight loss among older adults, and for older adults who are personally interested in weight loss and avoiding weight gain,” Jason Fanning, an assistant professor at Wake Forest University and a study author, said in a statement.

Keith Diaz, a certified exercise physiologist and assistant professor at Columbia University Medical Center who wasn’t involved in the research, isn’t sure that moving more alone is more effective than doing aerobics or structured exercise and moving more. He said he’d like to see more proof to confirm the report, citing the small study size.

Researchers haven’t looked at the differences of the “move more, more often” concept in various age groups, so it’s unclear if younger people would experience the same results, he added.

“There is probably little reason to think the benefits of physical activity are any different in younger adults than older adults,” Diaz told The Epoch Times.

Elaine Hargreaves, an associate professor at the University of Otago in New Zealand, said the concept of moving more and more often is applicable to all adults—especially those who sit a lot.

“Research suggests that it’s not just the total time sitting that’s the problem, but that we do it in long bouts,” she told The Epoch Times.

Historically, it has been widely believed that regular structured moderate physical activity is one of the most important health behaviors that exist, Diaz said.

“While this certainly still remains the case, what the latest science is showing is that your physical activity does not have to be high in intensity to reap some health benefits.”

“You can go to the gym for an hour or have several activity periods over the course of the day that add up to an hour. It all counts,” he said. “The beauty of this is that it provides flexibility in how you reach your activity goals.”

How to ‘Move More, More Often’

If you have a structured exercise plan (say you walk 30 minutes a day), you shouldn’t stop doing that. Ideally, people should incorporate planned physical activity and other forms of movement and also lower the amount of time we spend sedentary, Hargreaves said.

When you find yourself sitting for a long time, get up and move, even if it’s for two minutes, Hargreaves said. You can also set a timer or alarm to remind you to move—and have a plan in place for how you’ll move when it goes off.

“This helps to break old bad habits of sitting too long, and helps to create new habits of moving when the timer goes off,” she said.

Having a goal in mind for how much you want to move a day—minutes or steps taken—can also help. Record the movement if you think it will help you.

Another suggestion: Take a walk around the block, or up the stairs. Doing basic resistance exercises such as squats or calf raises can help. Just because there’s a chair available doesn’t mean you have to use it, she noted.

People can also get off the bus or subway a stop early, or park their cars further away from a destination, and walk the rest of the way.

If you drink a lot of water, you’ll have to go to the bathroom more often (at least in theory)—that’s another reason to move more often, she added.

Diaz likes to walk when he is on the phone or to have walk-and-talk conversations with colleagues.

“A lot of work conversations and meetings do not actually have to be done sitting down in an office or conference room,” he said.

“Instead of emailing, walk over and talk to a colleague. Take the stairs instead of the elevator. Walk to a bathroom on a different floor.”

Doing housework is another way to increase movement.

“Rely less on technology and modern conveniences and do some of the housework yourself. Use a hand vacuum instead of a Roomba. Wash your dishes by hand instead of using a dishwasher. Wash the car yourself instead of taking it to a car wash,” he suggested. Doing laundry, washing the floors, and cleaning windows also gets you moving.

Walking your dog or playing with the kids are other useful ways to add activity to your day.

“You don’t have to go to a gym to reap the benefits of physical activity. All movement counts,” Diaz noted.

For several decades, guidelines have recommended that adults exercise moderately or vigorously for at least 150 minutes per week.

“The problem is that for individuals who are largely inactive, which is much of the population, this requires a very significant lifestyle change and is a daunting task for many,” Diaz said.

Because “move more, more often” activities tend to be enjoyable—not straight-up fitness routines that could be difficult or boring—that may make it more sustainable for many compared to structured workouts.

That said, we don’t know what the right dose is in terms of how much to move or how often to lose weight or maintain it, he added.

Planning Activity Ahead of Time

Hargreaves said it’s a good idea to think about what may stop you from being active ahead of time so you can plan to overcome the obstacle.

“What barriers do you have that will impact your ability to move more? Plan for those so that when they do happen, you have a plan B to know how to overcome them,” she said.

And make time to recognize how you feel when you are being more active, Hargreaves said.

“Do you feel less tired, more energetic, happier, more productive? Make sure to recognize those feelings as they will maintain your motivation to continue moving,” she said. Relying on outcomes that can’t be attained in the short term—things such as lowering blood pressure, weight loss, and the like—may not be as helpful to keep you engaged.

Ultimately, people should do what works for them, especially older adults who already have a structured fitness routine.

“This is a single, relatively small study, with somewhat unexpected results as the authors themselves acknowledge,” Diaz says. “We need far more research before we tell people to stop exercising. And I doubt that will ever happen.”