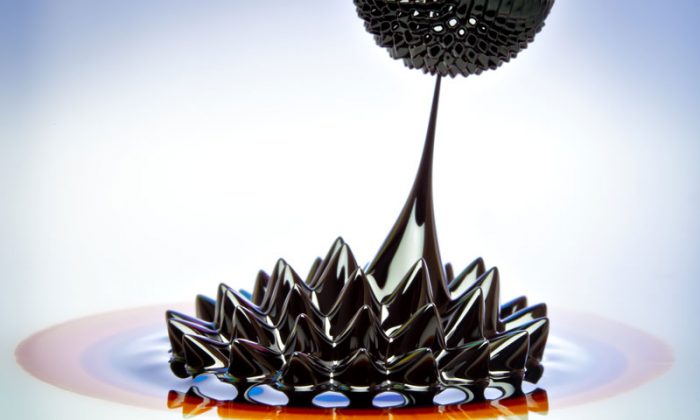 Macro photograph of Ferrofluid flowing from one magnet to another. Ferrofluid is a colloidal liquid of nanoscale particles in a carrier fluid that becomes magnetized by approaching a magnet. Liquids behave oddly at the nanoscale. Water, for example, seems to flow much faster within carbon nanotubes than classical physics says should be possible. (Shutterstock*)
Science

Movie Shows How Fluids Flow at the Nanoscale

A digital movie made using a new imaging technique shows liquid lead flowing at the nanoscale.

Scientists used 4D microscopy to take millions of still images of of molten lead moving inside a single zinc oxide nanotube in real time. Then they stitched the images together to create a digital movie of nanoscale motion.

A team at the California Institute of Technology developed the 4D imaging technology. A stream of ultra-fast-moving electrons bombards a sample in a carefully timed manner.

Each electron scatters off the sample, producing a still image that represents a single moment, just a femtosecond—or a millionth of a billionth of a second—in duration. The millions of images are then used to make the movie.

In the new work, researchers used single laser pulses to melt the lead cores of individual zinc oxide nanotubes and then, using 4D microscopy, captured how the hot pressurized liquid moved within the tubes—sometimes splitting into multiple segments, producing tiny droplets on the outside of the tube, or causing the tubes to break. They also measured the friction experienced by the liquid in the nanotube.

“These observations are particularly significant because visualizing the behavior of fluids at the nanoscale is essential to our understanding of how materials and biological channels effectively transport liquids,” says Ahmed Zewail, a professor of chemistry and physics.

Zewail and Ulrich Lorenz, a postdoctoral scholar in chemistry, describe the results in the journal Science.

*Image of “Ferrofluid” via Shutterstock