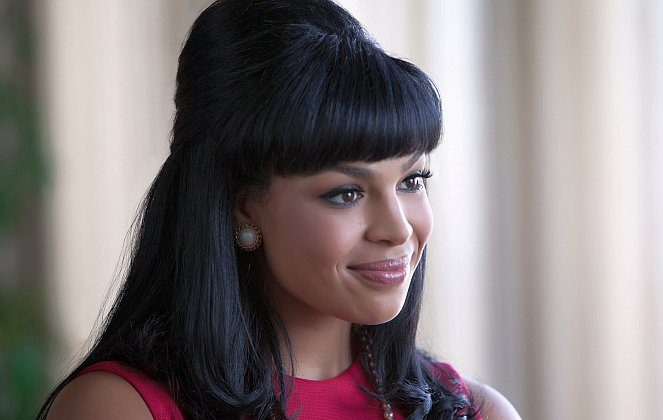 Can you say “blatant star vehicle?” It just has to be egregiously bad, right? Actually Sparkle is a remake of a 1976 film of the same name, loosely based on the true story of girl-group The Supremes’ rise to fame. And it’s actually surprisingly good.

Along with sister Dolores (Tika Sumpter), they form a trio called Sister and Her Sisters, at the behest of Sparkle’s boyfriend and wannabe manager, Stix (Derek Luke).

As loudly whispered in church by Stix and cousin Levi (Omari Hardwick) during the preaching, all the Williams sisters are super-fine, which leads to some head slapping by church elders.

The Williams sisters (no, it’s not tennis), having polished their act, then go to another nightclub challenge and mop the floor with the competition—and the competition are no slouches! A Columbia Records A&R exec hears them and wants to sign them. But by this time, Satin has revealed himself as a predictably abusive husband and derails the entire attempt.

During all of this, the sisters’ mother (the late, great Whitney Houston) scolds, rants, sets curfews, and micromanages. She also sings. It’s Whitney Houston we’re talking about.

The film starts off with a feeling of predictability and a fair number of clichés. However, during the supper scene where Satin arrives unannounced to announce marriage plans, the corrosive venom underneath his satiny exterior is revealed. All of a sudden, it’s a film with a vicious dramatic edge and demands to be taken seriously.

Epps as Satin takes a page out of Ike Turner’s book (played by Laurence Fishburne) in What’s Love Got to Do with It? All in all, the acting is pretty great.

Carmen Ejogo as Sister is a revelation. Her charisma is jaw-dropping. It’s clear that she’s lip-synching, but her femme fatale dance moves are off-the-charts seductive. One wonders if maybe the casting directors made a big mistake. You think, “She’s going to steal the whole movie, how can Jordin Sparks follow that?”

This movie was meant to be a celebration of Whitney’s return to movies after a 16-year hiatus. It’s also meant as a handing-off of the baton to the younger generation. Jordin Sparks can pretty much stand in those shoes; her final performance is a tour de force. While she doesn’t quite match Ejogo’s acting charisma, as a singer she’s got it in spades.