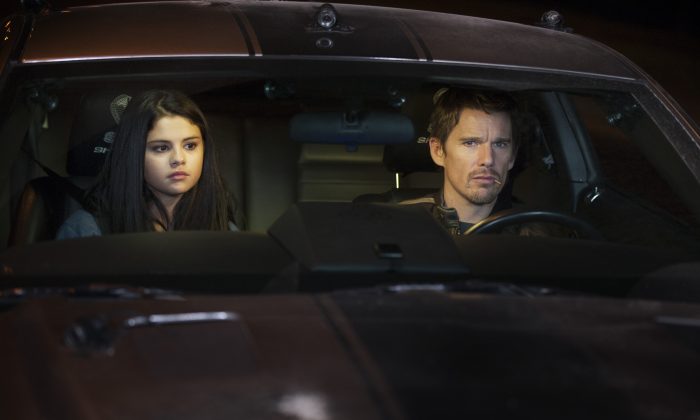 Get away as fast as you can
By Mark Jackson

“Video killed the radio star” is the title of a song from 1978. It should now be updated to, “Video games are killing the movies.” The noxious “Getaway” is a case in point.

“Getaway” would have made a popular video game. It still might.

To get her back, he’s ordered by Jon Voight’s character, The Voice, to drive an insanely muscled-up, 725 hp Shelby Cobra Super Snake Mustang around, very fast, in crowded areas, smashing things and running folks into ditches.

All of his driving directions are dictated to him via car speakerphone, by the afore-mentioned heavily German-accented 16-foot-tall mouth of Voight’s voiced villian, which we see way too much of.

We love muscle cars. We must make an entire movie about one. And put it in a video game, maybe.

At one point, a young girl jumps into Brent’s front seat. This is “The Kid.” Actually, it’s Selena Gomez, pop star, who dates pop star Justin Bieber. As a pop star, she sings “Love You Like a Love Song” and stuff.

Selena Gomez is 21. She’s very famous. In “Getaway,” however, she looks like she’s 12. Sometimes 9. Okay, maybe not 7, but almost. The Kid is baby-fat-cute like a chipmunk.

So when she curses very sailor-like, sticks a big gun in Brent’s face, and complains about her Super Snake (which it turns out he’s driving), as well as boasts about her genius-level hacker skills, one would like to say, “Please put down that fake gun and go sing a nice pop ditty.”

At this juncture, three reviewers (including yours truly) simultaneously looked at their watches and a loud sigh was heard to emanate. Maybe it was just this reviewer’s loud sigh that drowned out everything. He was also already thinking, “I can’t take it anymore,” and yet there was still a full hour left before he would be able to get away from “Getaway.”

Oh, look! Her hacker skills come in handy. She figures out that all this driving and smashing is creating a diversion for a bank heist.

For her, a couple more acting lessons, and roles where she’s not a bratty, complaining 8-year-old should have her doing nicely as pop-star-turned-actress.

She should consider firing her agent right now, though.

Nature follows certain laws. So does the craft of storytelling. Laws as ironclad as “Once upon a time.” If you start with the high chase at the beginning, you’ve left yourself nowhere to chase, even if you’re chasing nowhere very fast in a Super Snake. It becomes boring noise.

PG-13? What happens when kids get an entire movie’s worth of uniformly loud, frenetic, in-their-faces, nonstop stimulation? Same thing that happens when their ear buds blare nonstop with their faces sucked down smartphones, playing video games.

They’re developing and exacerbating seriously bad cases of ADD. But don’t worry because the jury’s still out on that.

Somebody please get “Getaway” and the entire genre of video-games-as-movies away from kids.