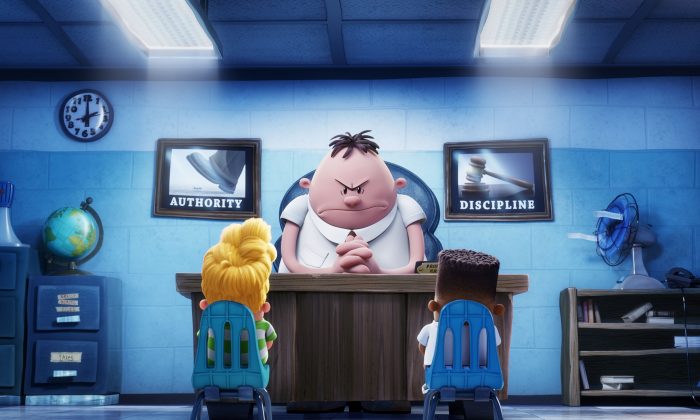 There oughta be a 4-foot sign at “Captain Underpants” that you stand next to that says “You must be this short to enter.” Speaking of short, this’ll be my shortest review ever; I’m going to sum up the entire movie by telling you the name of a character therein: “P.P. Die-uh-ree-ah-stein Poo-pee-pants.”

I may have spelled that wrong. If you’re between the ages of 7 and 9, you will howl at the plethora of potty jokes. If you are a parent-person, you’ll mostly smile wanly and snooze, your soul drifting about in the vicinity of the planet … (wait for it) … Uranus—only to be awakened now and again by such things as animated, building-sized toilets.

George Clooney is on record as saying he considers Whoopie cushion-type noises one of the eternal building blocks of comedy.

It Was Originally a Book Series

Much like the little yellow minions in that minion movie, who, upon hearing the name “Professor Higginsbottom,” look at each other, raise an eyebrow, and snigger “bottom!”, then laugh themselves silly, so exactly do George and Harold become friends, when, in preschool, a teacher teaching the planets says “Uranus.” Whereupon they laugh themselves silly. Kind of like what would probably have happened if Eddie Murphy and Terry Gilliam had sat next to each other in kindergarten.

So, they’re besties, and they have an amaaazing tree house, where they write comic books. Harold draws, George writes, and together they have come up with—”Tra-la-la!”—Captain Underpants.

Clark Kent is to Superman what their dastardly Principal Krupp (voiced by Ed Helms) is to Captain Underpants. Why champion this man? He confiscates all their creativity!

Well, the last straw comes when Krupp tries to destroy their subversiveness by sending them to different classrooms (at opposite ends of the school!). George utilizes his comic book-style, red swirly hypnotizer-ring on Krupp, who turns out to be highly suggestible, and then the boys have their way with him, making his pudgy-bellied self run around in his tighty-whitey’s, declaiming “Tra-la-la!” whilst holding a plunger/scepter, as the titular, no-actual-superpowers-having, sans toupeé, undergarmented hero.

Then, things take a turn for the worse when Krupp hires a new science teacher (voiced by Nick Kroll). This is the guy I named at the beginning. He’s a fiendish man, this Professor Poopypants. He wants to shut down all laughter. Expunge it!

Is he really fiendish? Well, yes, but maybe the movie can be a teaching piece: You explain to the kids why they should be kind and empathize with him. If they grew up with that name, they might want to expunge all laughter, too. Imagine the torture the young Poopypants must’ve endured in grade school: “Yo, Diarheastein, did you P.P. today? Gimme your lunch money before I kick you in your Poopypants! Bah-hahaha!” Sad.

Much Doo About Nothing

Why so much poo-relatedness? Isn’t that un-PC? Isn’t that wrong? Jokes of the flatulent variety, all the time? Well, 8-year-olds are just getting to know their bodies; it’s all quite basic. So a movie that’s heavy on the Whoopie cushions is very funny for wee ones. They know and cherish such noises.

After all, George Clooney is on record as saying he considers Whoopie-type noises one of the eternal building blocks of comedy. Clooney owns remote Whoopie cushions. As he once said in a Rolling Stone interview, “[My friends and I] think it’s one of the funniest things in the history of mankind.” I agree. Flatulence is always highly interesting to small children and men and dogs.

It’s actually a lot funnier for an adult than you would think—sometimes downright hilarious—as well as eternally cheerful. And they totally stole the voice (and visuals) of the hysterical snarky slug character Roz from “Monsters, Inc.”, right down to the cat-eye glasses, and to excellent effect.

The film is about the value of laughter, friendship, and ultimately, compassion. In the end, George and Harold figure out Principal Krupp is mean and grumpy because he has no friends, and hook him up with the lunch lady. Forgiveness! Kindness! Compassion! Humor! Poo! Wee! Yay!