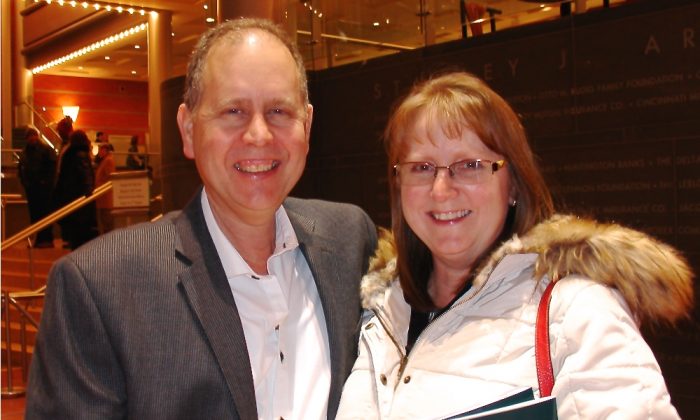 Accompanying the church singer was her husband, Mr. Brent Nibert, who also saw profound meanings in the performances. “I liked the meaning of it. I very much like standing up for the belief and saying we believe that there’s a higher being, and we’re going to express that. I love it when it can be expressed in public,” he said.

According to the company’s website, “Throughout history almost every culture looked toward the divine for inspiration. Art was meant to uplift, bringing joy to both the people who created and experienced it. It is this principle that drives Shen Yun performers and their art.”

But Mr. Nibert was saddened to hear about the repression of spirituality in modern day China—specifically against the meditation practice, Falun Dafa, and said, “I feel for China where they can’t express that. Very tough to take. You just can’t believe that still goes on. It was very moving, that part.”

“Shen Yun cannot be seen in China today, where traditional culture has been nearly lost. Yet Shen Yun—a non-profit organization—has become an international phenomenon, bringing the wonders of ancient Chinese culture to millions across the globe,” says Shen Yun’s website.

The spirituality Ms. Nibert saw in Shen Yun touched her on a profound level: “All that they were singing about…. very spiritual. That was very, very good. I loved that. Because it moves me … I saw God, I felt God.”

Mr. Nibert reiterated this thought when he said that “The higher being, we know, was in there tonight.”

Ms. Nibert saw a promise of hope and said, “The spring scenes really just uplifted me. Just everything was wonderful. Very peaceful. I was like, ‘Oh!’ It was great!”

In parting, Mr. Nibert promised, “We’ll come back next year.”