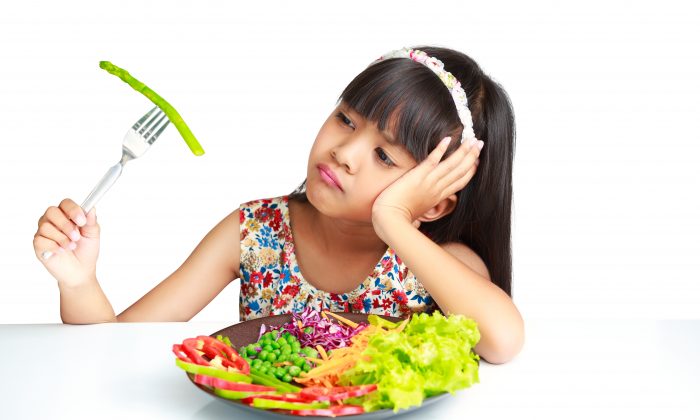 A mother’s own eating habits—and whether she views her child as a picky eater—has the most significant impact on whether her child consumes enough fruits and vegetables.

“What and how mothers eat is the most direct influence on what toddlers eat,” says Mildred Horodynski, professor of nursing  at Michigan State University.

“Health professionals need to consider this when developing strategies to increase a child’s consumption of healthy foods. Diets low in fruit and vegetables even at young ages pose increased risks for chronic diseases later in life.”

Horodynski looked at nearly 400 low-income women (black and non-Hispanic white) with children ages 1 to 3 enrolled in Early Head Start programs and found that toddlers were less likely to consume fruits and vegetables four or more times a week if their mothers did not consume that amount or if their mothers viewed their children as picky eaters.

The research is reported in the journal Public Health Nursing.

When mothers viewed their children as picky eaters—unwilling to try unfamiliar foods—a decrease also was seen in the amount of fruits and vegetables consumed.

When mothers viewed their children as picky eaters—unwilling to try unfamiliar foods—a decrease also was seen in the amount of fruits and vegetables consumed.

“Perceptions of a toddler as a picky eater may be related to parenting style or culture,” Horodynski says. “Mothers who viewed their children as picky eaters may be more lax in encouraging the consumption of fruits and vegetables.”

Previous research shows that early repeated exposure to different types of foods is needed. Up to 15 exposures may be needed before it can be determined if a child likes or dislikes a food.

The study, which collected information from mothers from 28 Michigan counties, also revealed differences among race: Black mothers and toddlers did not consume as much fruit and vegetables as non-Hispanic whites, though a majority of all study subjects fell below recommended U.S. dietary guidelines.

“Special attention must be given to family-based approaches to incorporating fruits and vegetables into daily eating habits,” she says.

Public health nurses and other health professionals must play an important role in enhancing mothers’ awareness of the importance of healthy eating, Horodynski adds. “Mother needs to have the knowledge and confidence to make these healthy decisions for their children.”