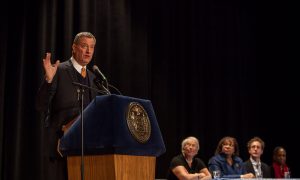 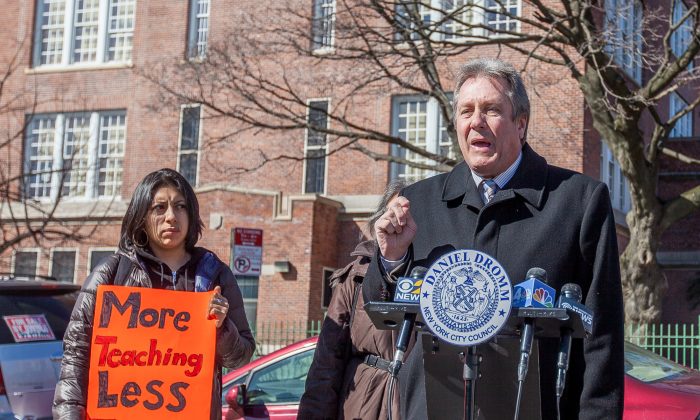 While a growing number of parents are deciding to opt their children out of the tests, the tests scores won’t matter nearly as much this year, as the state has backed off bit by bit on the rules associated with its latest testing regime.

Changes in the state budget Monday prevent test scores from being the primary factor in middle school admission or grade-promotion decisions. Middle school students won’t have the test results on their permanent records, and standardized testing of kindergarten to grade two students is now banned.

The era of standardized testing came with President George W. Bush’s No Child Left Behind Act. The argument was that intensive testing would make children learn more. Punitive measures were also put in place. Students could be held back a year, and schools could be closed if test scores were not high enough.

Yet the results were mixed at best, as many states just lowered the bar for passing the tests to boost the scores.

Next came Common Core standards, which were pushed by President Barack Obama’s Race to the Top grant incentives, which doled out millions for education reform in return for 45 states’ alignment with the Common Core. New York has been among the early adopters.

But to the horror of parents and students, when the New York City Common Core test scores were released for the first time last summer, the passing rate dropped by some 30 percent.

Parents complained their children were set up to fail, as teachers didn’t have enough time and resources to prepare the students. The new state law limits test prep time to less than 1 percent of class time.

Meanwhile, a growing number of people are saying that punishing students and schools based on a single test result was a bad idea to begin with.

“The way in which the tests are being used … was never the way in which testing was meant to be used,” said City Council Education Committee Chair Daniel Dromm, at a rally Tuesday in support of parents who chose to opt their children out of the tests.

“We must look at children holistically, and that’s not what happens when we put such a high emphasis on testing,” he said.

Dromm said he’s not against testing in general, but argues the stakes attached to the English and math Common Core tests are too high.

“I had people come up to me on the street and explain that their kids were sick this morning going into school, because they knew they have to take the test,” Dromm said.

Danny Katch, a parent from Queens, opted his 9-year-old daughter out of the tests this year, because he thinks the scores have been used inappropriately. He attended the rally with Dromm Tuesday morning in from of his daughter’s school, P.S. 69.

Katch feels the punitive measures attached to the tests were designed by people who don’t understand education. “They come from the business world and they have these models of efficiency from business,” he said. “If that’s your framework, then children are products and I don’t think that’s how education works.”

He said the changes made by the budget bill that lower the stakes for students are part of the solution, but don’t go far enough.

Teachers are judged on how much their students’ test scores improved since the previous year, compared to the improvement of similar students at other schools. But since the progress is not measured against a single yardstick, but rather against the progress of others, a certain percentage of teachers will inevitably end up at the bottom.

Also, teachers of subjects other than math and English still have their evaluations based on the English and math test results. If the scores don’t rise enough for two years in a row, the teacher can be fired.

Dromm, a veteran teacher himself, said the test results shouldn’t be used for teacher evaluations at all.

“A principal can walk into a classroom and know in about two minutes what’s going on,” he said. “I believe that the principals know who are good teachers.”

Last year several hundred city parents opted out of the exams, and two to three times more than that are expected to follow suit this year.

Dromm plans to introduce a resolution requiring that the city’s Education Department inform parents they can opt their children out of the tests.