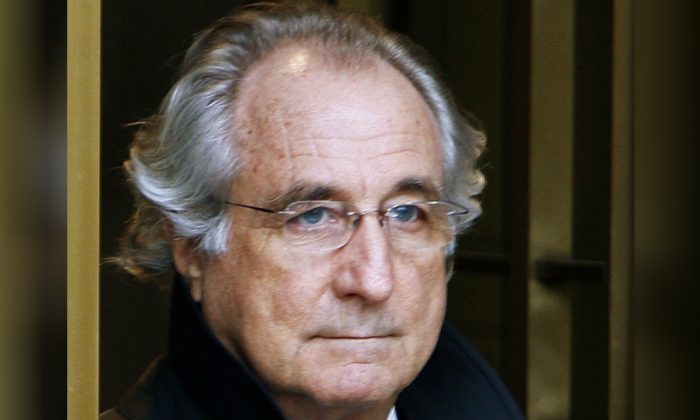 More Money for Madoff Victims, Nearly 10 Years After His Arrest

NEW YORK—Victims of Bernard Madoff’s Ponzi scheme will soon receive another $695.3 million from a government compensation fund, the U.S. Department of Justice announced on Nov. 29, less than two weeks before the 10th anniversary of the swindler’s arrest.

The payout, to more than 27,300 victims, is the third from the Madoff Victim Fund, which has roughly $4 billion and was set up in November 2013 to help individuals, schools, charities, pension plans, and others recoup their losses from the fraud.

With the distribution, victims will have received $1.97 billion from the fund, which is run by former U.S. Securities and Exchange Commission Chairman Richard Breeden.

An additional $803 million has been earmarked for payout, for a total $2.77 billion to be paid to roughly 37,000 victims, including 22,000 who had previously recovered nothing.

Another $13.3 billion has been recovered by court-appointed trustee Irving Picard for former customers of Bernard L. Madoff Investment Securities LLC. He estimates they lost $17.5 billion, and Picard has paid out $11.28 billion so far.

Unlike Picard, Breeden is also paying victims who suffered indirect losses from Madoff, such as by investing in hedge funds that sent their money to him. Funds are earmarked when claims are incomplete, sometimes because of litigation.

Most of the money in the government fund came from settlements with the estate of Jeffry Picower, a Madoff investor from Florida, and JPMorgan Chase & Co, once Madoff’s main bank.

Breeden expects the fund to make at least one “significant” payout in 2019.

Madoff was arrested on Dec. 11, 2008, after he told his sons his firm was a fraud and his family contacted investigators.

He spent some customer funds on his family and friends, used new funds to repay older investors and issued fake account statements to make customers think he was making them money.

Prosecutors have estimated that $65 billion was wiped out. Other victims included a charity set up by Nobel Peace Prize winner Elie Wiesel; the actors Kevin Bacon and Kyra Sedgwick; and the Wilpon family, owners of baseball’s New York Mets.