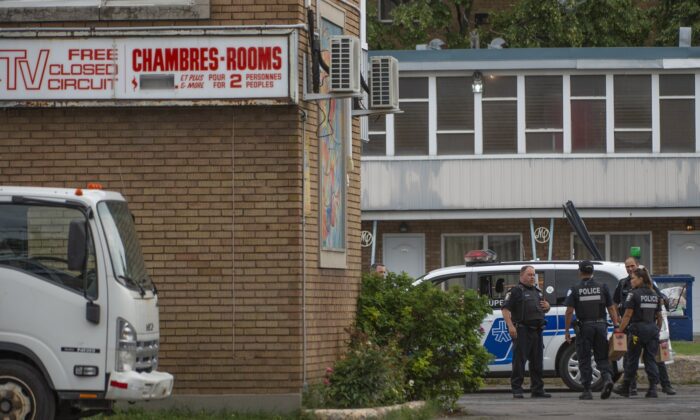 A 26-year-old man is dead after being shot by police in the parking lot of a motel in Montreal's Saint-Laurent borough early Aug. 4, 2022. (The Canadian Press/Peter McCabe)
Canada

Quebec’s independent police watchdog says it is investigating after a 26-year-old man allegedly connected to three recent homicides in the greater Montreal area was killed Thursday by Montreal police.

The Bureau des enquêtes indépendantes says the Montreal police tactical unit was at a motel at about 7 a.m. for a search linked to an investigation into three homicides in Montreal and Laval in the past two days.

The watchdog, also known as the BEI, says Montreal officers were confronted by a suspect with a firearm.

They say shots were fired and the man was struck by at least one bullet and pronounced dead at the scene.

Montreal police said earlier they had killed a murder suspect during a police operation at a motel on Marcel-Laurin Blvd. in the city’s St-Laurent borough and referred all questions to the police watchdog.

The police operation comes after a pair of killings about 65 minutes apart and just a few kilometres from each other on Tuesday evening in Montreal, in the St-Laurent and Ahuntsic-Cartierville boroughs.

Police said they could not rule out the victims were chosen at random.

One of the Montreal victims on Tuesday evening was identified as André Fernand Lemieux, 64, the father of Canadian professional boxer David Lemieux. The other victim was Mohamed Salah Belhaj, 48, an intervention officer at a local mental health hospital.

A senior Montreal police spokesman said Wednesday that investigators were certain a single suspect was behind both killings and they were waiting on ballistics evidence to confirm it.

At about 9:30 p.m. Wednesday, a third man was killed in Laval, just north of Montreal.

Stéphanie Beshara, a Laval police spokeswoman, says police received numerous 911 calls for shots fired in a residential area in the Laval-des-Rapides neighbourhood and found a 22-year-old man who had been shot and was declared dead at the scene.

Beshara says Laval police were present at the motel in Montreal on Thursday where the suspect was killed. They haven’t ruled out that the homicide on their territory was also a random attack.

The BEI, which investigates when someone is injured or killed during a police operation, said seven investigators are assigned to the case.

At the request of the police watchdog, the three homicide investigations in Montreal and Laval have now been handed over to Quebec provincial police.