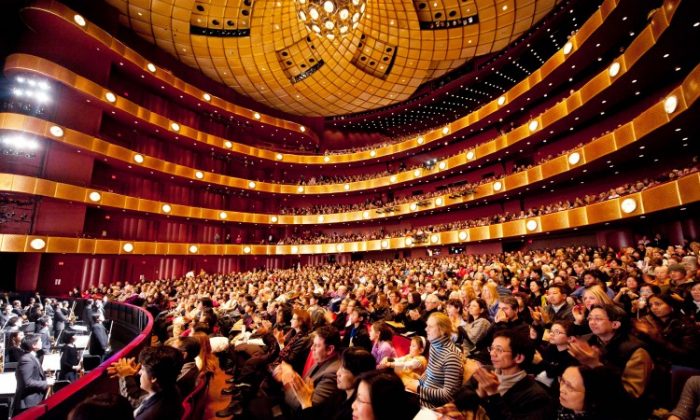 Montblanc Honors Shen Yun as ‘Patron of the Arts’

THE HAGUE, The Netherlands—Shen Yun Performing Arts, the world’s premier classical Chinese dance and music company, was awarded a Montblanc art patronage award on March 12 at the Lucent Danstheater in The Hague.

Montblanc is a world leader in making sophisticated, high quality writing instruments. The company, which is named after the highest mountain in Western Europe—Mont Blanc, operates in more than 70 countries worldwide.

New York-based Shen Yun Performing Arts was established in 2006 with a mission to revive China’s 5,000 years of divinely inspired culture—much of which has been destroyed under 60 years of communist rule in China.

“We are very proud to present Shen Yun Performing Arts with our Montblanc de la Culture Arts Patronage Award. As a symbol of our recognition and respect for the rich Chinese cultural heritage that you [the audience] will discover during this magnificent performance. Five thousand years of enchanting history brought to you by the incredibly talented performers of Shen Yun,” said Jan van Holten, managing director, Montblanc International B.V. in a congratulatory statement.

The Montblanc art patronage award was presented in a ceremony following the European premiere of Shen Yun Performing Arts 2012 tour at the Lucent Danstheater in The Hague.

“Montblanc is also a very big fan of cultural backgrounds and anything that has got to do with art and culture, so every year what we do is, we produce a number of writing instruments and with those writing instruments we honor people,” said Mr. van Holten.

This year’s award comes with a limited edition pen that honors the first patron and protector of the arts and culture known in the West, Gaius Cilnius Maecenas, who served under the Roman emperor Augustus and played an important role in protecting art and culture.

With classical Chinese dance as its hallmark, Shen Yun is leading a revival of the classical Chinese arts. In just three years after its establishment in 2006, Shen Yun had grown from one to three performing arts companies, including orchestras, performing around the world. Its artists include many winners of international dance and vocal competitions.

Mr. van Holten said that after watching the Shen Yun performance he thought it was “astonishing.” It was the classical Chinese dance that struck him in particular.

“The way it all goes smoothly and at the same time the elegance was very nice … the softness and the elegance of the ladies and the men who are a bit tougher and more forceful,” Mr. van Holten said.

Classical Chinese dance is a dance system that has a history of thousands of years and is built upon a deep foundation of traditional aesthetics.

According to Mr. van Holten, supporting genuine art is “in the backbone of the company,” and it will certainly continue to support the arts.

Correction: The Arts Patronage Award given to Shen Yun Performing Arts at this ceremony was an initiative of Montblanc Benelux. It was not the international Montblanc de la Culture Arts Patronage award offered by the Montblanc cultural foundation. Due to the awards being identically named, the reporter initially erroneously identified it as the latter. The Epoch Times regrets the error.