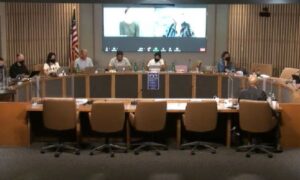 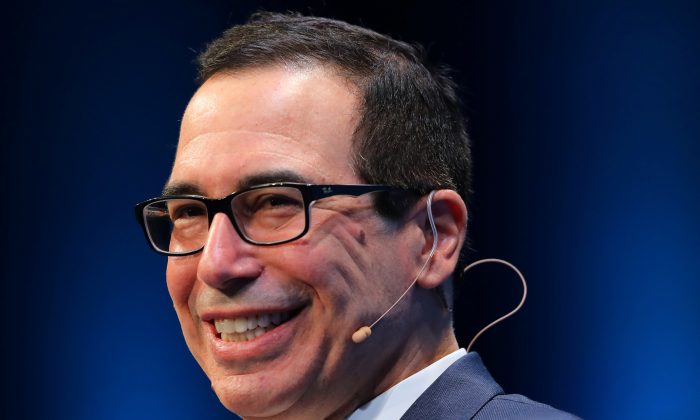 Steve Mnuchin, Treasury Secretary, during the Milken Institute Global Conference in Beverly Hills, Calif., on May 1, 2017. (REUTERS/Mike Blake)
US

BEVERLY HILLS—Treasury Secretary Steven Mnuchin said on Monday that economic growth of three percent is achievable in the next two years as the Trump administration sets out to dramatically cut taxes.

Speaking at the Milken Institute Global Conference in Beverly Hills, California, almost a week after he helped unveil plans to cut taxes for many people and corporations to 15 percent, Mnuchin said tax reform and regulatory relief will help spur economic growth.

“The tax plan is our version of a jobs bill,” Mnuchin said in an onstage interview with journalist Maria Bartoromo.

Although the stock market has reacted positively to Trump’s election—with the S&P 500 index up 11 percent since November—critics of the tax plan have said it is ambitious and lacks details.

In a light-hearted moment, Mnuchin quipped that many at the conference had him to thank for the surge in bank stocks that have helped lift their portfolios, bringing laughter from the audience.

But some at the conference expressed concern that the generally optimistic atmosphere might begin to fade.

“I’m concerned that if we don’t see tax or healthcare reform by the end of the year, markets will start to doubt the administration’s ability to deliver it,” said Scott Minerd, global chief investment officer at Guggenheim Partners.

Mnuchin said he has been working with congressional leaders to push tax reform and he hopes for bipartisan support. Mnuchin told CNBC on the sidelines of the conference that the tax proposal was purposely vague so that the administration could work with legislators to craft something that will pass Congress.

The Trump administration has invited many business leaders into the White House and is listening closely to their concerns and hopes on tax changes, he added.

David Solomon, president and co-chief operating officer of Goldman Sachs, said the great sense of optimism early in Trump’s tenure may be fading some.

“This quarter it feels like conviction for tax and regulatory reform is more muted.”

Solomon’s predecessor at Goldman, Gary Cohn, joined the Trump administration as director of the National Economic Council and one of his primary goals has been to work on tax reform.

One concern associated with the Trump tax plan is how the government plans to pay for it. Mnuchin said that there are plenty of other ways to off set the revenue that would be lost through reduced tax receipts. He did not offer many specifics.

Indeed many at the conference, including investment managers whose businesses could benefit dramatically from the cut in taxes, were cheering the new administration and its can-do attitude which also includes plans to tackle health care reform.

Prospects for growth look to be better around the world, several said.

Yet there were also some rumblings of concern that ambitious projects would not be completed and that tensions around the world with other governments would increase.

Mohamed El-Erian, chief economic adviser at Allianz, said that optimism is off the charts according to the stock market but geopolitical issues are a real concern.