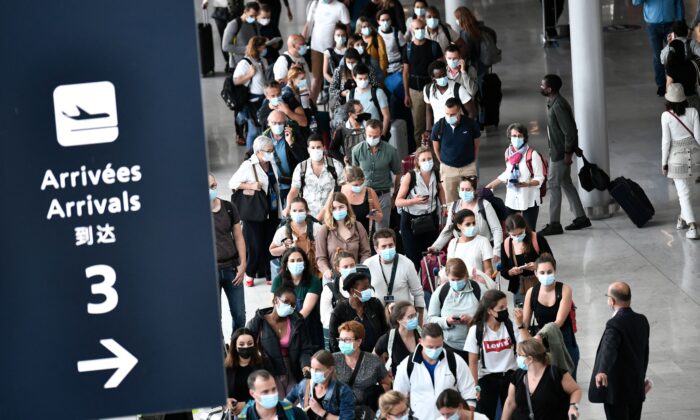 Travelers arrive at the Orly airport in Orly, near Paris, on Aug. 20, 2021. (Stephane de Sakutin/AFP via Getty Images)
WORLD

Americans not vaccinated against the CCP virus will no longer be allowed to visit France for non-essential travel starting next week as the European nation announced new travel restrictions for the United States and Israel.

According to a French government decree that was issued on Sept. 9, the new rules will go into effect at midnight on Sept. 12, when the United States and Israel will be removed from the “green” list and get downgraded to the “orange” list.

The downgrade means Americans and Israeli tourists who chose not to get vaccinated against the CCP (Chinese Communist Party) virus are no longer able to visit France for non-essential travel.

However, tourists from both nations who are able to provide an essential reason for their stay will be allowed in if they present a negative COVID-19 test and quarantine for seven days upon arrival. Prior to the proclamation, unvaccinated travelers only had to present a negative test result for entry.

Trips to France that fall under the category “essential” include students beginning academic studies and essential business trips, or French citizens and residents returning home, but it doesn’t include family visits or visits to second homes, The Local reported.

Fully vaccinated travelers can still visit the country for any reason and don’t have to present a negative COVID-19 test result.

The U.S. Centers for Disease Control and Prevention vaccination card is accepted as proof of vaccination at the French border, as well as restaurants, among other places, that require such documents. France’s implementation of a so-called “COVID-19 health pass” has since prompted massive protests across the country from opponents who denounce such rules, calling it a restriction to their freedom.

To count as “fully vaccinated,” travelers must have received a shot approved by the European Medicines Agency—from Pfizer, Moderna, AstraZeneca, or Johnson & Johnson—at least two weeks prior to travel for double-dose vaccines and four weeks for a single dose.

Other European nations that recently announced travel bans against unvaccinated American tourists include the Netherlands, Spain, Denmark, and Italy, with Italy also adding entry requirements for those who are vaccinated.

Sweden, meanwhile, banned all arrivals for foreign nationals outside the EU/EEA (European Union/European Economic Area) regardless of vaccination status. The travel rules in the Nordic country will remain in effect until the end of October.

The restrictions on international travel come as the European Council, which represents the bloc’s 27 governments, decided on Aug. 30 to remove the United States, among other countries, including Israel—one of the most vaccinated countries in the world—from its list of “safe countries” due to an increase in CCP virus cases.