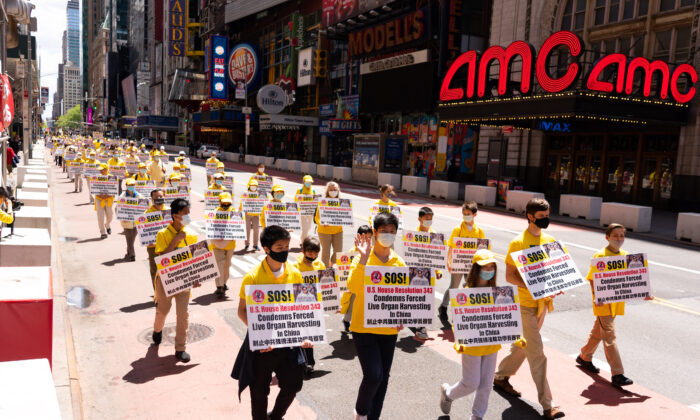 Practitioners of the spiritual discipline Falun Gong hold a parade in New York to celebrate World Falun Dafa Day and to protest the ongoing persecution of the group by the Chinese Communist Party in China, on May 13, 2020. (Larry Dai/The Epoch Times)
Chinese Regime

For nearly two decades, a secretive agency has worked to carry out orders from the top leadership of the Chinese Communist Party to “eradicate” a group of spiritual believers deemed to be a threat to the atheist regime.

Known as the “610 Office,” the group was set up in 1999 as an “extra-legal” body to specifically target adherents of Falun Gong. While very little public information is available about the office, including its chain of command, what is clear is that its activities aren’t confined to China’s borders, according to a French military think tank.

The 610 Office had about 15,000 people in China and abroad tasked with suppressing Falun Gong adherents, according to a recently released 650-page report by the Institute for Strategic Studies of Military Schools—a think tank funded by the French military—that details the Chinese Communist Party’s (CCP) expansive global influence activities.

Falun Gong, also known as Falun Dafa, is a spiritual practice consisting of meditative exercises and moral teachings based on truthfulness, compassion, and tolerance. The group’s popularity surged in China during the 1990s, with estimates putting the number of adherents at about 70 million to 100 million by the end of the decade.

Jiang Zemin, the CCP leader at the time, was concerned about the faith group’s growing popularity, according to the report.

“Jiang Zemin saw this as a threat to the survival of the Party, which could not tolerate the existence of a social structure beyond its control,” the report reads.

As a result, Jiang set up the 610 Office on June 10, 1999—its name being drawn from the date of its founding. The office would function in a manner akin to Nazi Germany’s Gestapo, with powers overriding China’s courts and police.

The office, together with the CCP’s judicial, public security, and legal bodies, has carried out a far-reaching persecution campaign that continues to this day. According to the Falun Dafa Information Center, millions of Falun Gong adherents in China have been detained inside prisons, labor camps, and other facilities in China, with hundreds of thousands of them being tortured while incarcerated.

Internal documents obtained by The Epoch Times show that the 610 Office was disbanded between 2018 and 2019, and its functions were merged into other CCP organs, including the Central Political and Legal Affairs Commission, as well as the Chinese police force.

Despite the organizational change, there’s no sign that the CCP is moving away from its campaign of repression. During the first six months of 2021, at least 674 Falun Gong adherents were illegally sentenced, with the longest sentence being 14 years, according to Minghui.org, a U.S.-based website that tracks the persecution of Falun Gong practitioners.

The office also has agents stationed overseas to execute a range of actions designed to repress and malign Falun Gong communities worldwide.

“There is a member of the 610 Office in every Chinese diplomatic mission, whose mission is to detect, file, and persecute Falun Gong practitioners, while conducting propaganda activities aimed at foreign governments to dissuade them from having relations with them,” the report reads.

“Although the 610 Office is not a major player in Chinese influence operations, its activities in countries with large numbers of Falun Gong practitioners constitute real interference.”

The report pointed to remarks made by Chen Yonglin, a former Chinese diplomat who defected to Australia more than a decade ago, during a U.S. House congressional hearing in 2005. Before his defection, he was the former consul for political affairs in the Chinese Consulate in Sydney and was in charge of implementing Beijing’s policies on Falun Gong.

The consulate had a “special group” headed by the consulate general to “monitor and persecute” Falun Gong adherents in Australia, according to Chen. The group was “part of the 610 Office system.”

“To my knowledge, similar groups have been established in the Chinese missions in the United States and other countries where the Falun Gong is active,” he said.

The months-long campaign of violence turned out to be connected to the Chinese Consulate in New York. Peng Keyu, then-New York consul general, admitted during an undercover phone call to having instigated pro-CCP groups to launch a series of assaults on Falun Gong adherents in Flushing.

In Australia, the local 610 Office-affiliated group was supported by a large Chinese intelligence-gathering unit in the country, according to Chen.

“I am aware there are over 1,000 Chinese secret agents and informants in Australia who have played a role in persecuting the Falun Gong, and the number in the United States should be higher,” he said in his prepared statement during the 2005 hearing.

Complementing the work of this local network of spies, Chinese diplomats also would put pressure on Australian politicians to accept the Party’s position on Falun Gong. This was done by offering local officials political and economic benefits, according to Chen. The consulate was “successful” in reducing the number of politicians willing to meet with local Falun Gong adherents or issue public letters of support, he said.

There have been similar incidents involving Chinese consulates in the United States. According to a 2002 congressional hearing, the then-mayors of several U.S. cities, including Baltimore, Westland, Houston, San Francisco, Saratoga, and Seattle—were pressured by the consulate in their regions to either not issue proclamations in support of Falun Gong or rescind those that had already been issued. Some mayors rescinded such proclamations.

A more recent incident occurred in August 2017, when the judiciary committee of California’s state Senate unanimously approved a resolution condemning the CCP for persecuting Falun Gong. However, within a few days, the lawmakers held another vote to return the measure to the rules committee, preventing the resolution from being put to a floor vote.

The turnabout was connected to a threatening letter that the Chinese Consulate in San Francisco had sent to every member of California’s state Senate. In the letter, the consulate claimed that the resolution may “deeply damage the cooperative relations between the state of California and China” in areas such as trade and tourism.

Ultimately, the Falun Gong resolution never made it to the Senate floor for a vote.

A similar network of Chinese agents targeting the Falun Gong community operated in Canada, the report states, citing previous comments made by Hao Fengjun, a former official with the 610 Office, who fled China in 2005 and sought political asylum in Australia.

Hao said at the time that there were more than 1,000 spies in Canada tasked with surveilling local Falun Gong adherents. Among the spies were Chinese Canadians, businessmen, and students, and their activities concentrated mainly in Vancouver and Toronto, according to the report.

Also in Canada, the CCP was known for deploying another tactic to slander Falun Gong: having people impersonate adherents of the practice and send insulting and sometimes threatening emails to government officials, according to the report.

Amnesty International Canada and the Canadian Coalition on Human Rights in China addressed that tactic in their 2020 report, calling it a hallmark of the CCP’s overseas campaign against Falun Gong adherents designed to “undermine their reputation” and to “hurt their relationship with recipients.”

“Government officials at all levels in many countries have been repeatedly and systematically targeted by fraudulent emails from people claiming to be Falun Gong practitioners. The sender is often obsessive, irrational, and rude, giving legitimacy to the Chinese regime’s claims that Falun Gong is a threat to society,” the report reads, citing an unnamed member of the Canadian Falun Gong Association.

The report cited a 2020 incident when a broker, allegedly with ties to the CCP, offered 20,000 pesos (about $310) to an editor of a small-sized media outlet in exchange for publishing an article defaming Falun Gong. The same broker also tried to get larger local media outlets, including Infobae, El Cronista Comercial, and Diario Popular, to publish the same article.