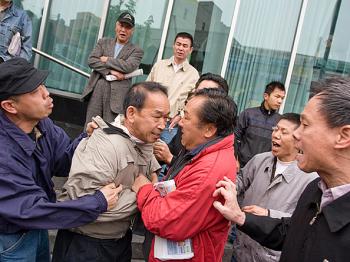 Flushing resident Edmond Erh was assaulted by a pro-CCP mob while supporting a booth for quitting the Chinese Communist Party. (Dayin Chen/The Epoch Times)
US

By Joshua Philipp
Print
FLUSHING, NEW YORK CITY—Chinese signs protrude from the sides of buildings lining the streets, the smell of fish and fried food fills the air. As a self-made second Chinatown in this great melting pot, the crowded streets of Flushing are about as close as you can get to Beijing in the U.S., and with the recent string of attacks against Falun Gong practitioners, this has become even truer.

The attacks began on May 17 near the Flushing library. Practitioners of Falun Gong were at a booth set up to help Chinese withdraw from the Chinese Communist Party (CCP). Mobs of over 200 Chinese showed up, some waving red communist flags, and spat on, cursed, and physically and verbally attacked Falun Gong practitioners who were present.

The attacks were, in part, spurned by CCP-controlled media, which spread fabricated information that Falun Gong practitioners had prevented funds from reaching the victims of the Sichuan earthquake and “do not love China.” Later reports showed evidence of outside influence and of organization in the mob. The World Organization for the Investigation of the Persecution of Falun Gong (WOIPFG) investigated the incidents, and released a voice recording of the New York Chinese Consul General, Keyu Peng, in which he admits to having encouraged the incident.

Despite the attacks, Falun Gong practitioners in Flushing have continued to hand out printed materials that clarify the situation.

“Some people do say bad things to me, but with them I usually don’t say anything back,” said Victoria Wu, a high school teacher and Falun Gong practitioner who came to Flushing to pass out informational leaflets about the recent incidents there. “Whether they accept it or not doesn’t make much of a difference to me but I try to be compassionate to everyone.”

Wu mentioned that one man in particular has been taking materials from local practitioners only to tear them up in front of them. Wu said that she had tried talking with him once, only to be met with a slew of curses and insults.

“He wasn’t the kind of person you can reason with,” said Wu. “We all meet people who curse at us and yell at us, but we don’t get angry.”

Chiu Ying, a 63-year-old Falun Gong practitioner often hands out pamphlets with a smile on the corner of Roosevelt and Main Street in Flushing. Ying mentioned that she had also encountered people who will tear up her materials and curse at her. One man in particular made a scene until the police showed up and asked him to leave. Ying said that she sees handing out the flyers as a way of offering people the truth, rather than the propaganda spread by CCP-controlled media.

“When we hand out newspapers it’s like giving them a choice and they can either take it or not take it,” said Ying. “People like that man, I feel so sorry for them. They’re misled by the Communist regime. I really feel sorry for them.”

The violence has slowly died down as the weeks have gone by. Since May 17, at least 12 of the attackers have been arrested, while not one case of a Falun Gong practitioner hitting back or retaliating has occurred. Some residents have also begun to show support to the Falun Gong practitioners and in June alone over 100 Chinese in the area submitted their withdrawals from the CCP, with more withdrawals being submitted daily.