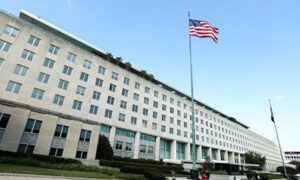 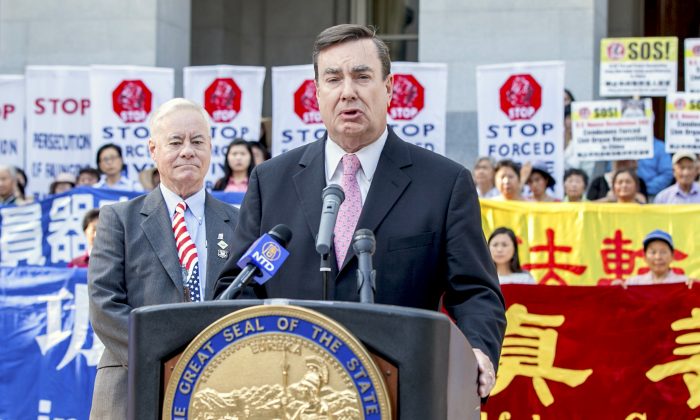 Senator Joel Anderson speaks in front of the California State Capitol in Sacramento during a rally to support a resolution condemning the Chinese Communist Party's persecution of Falun Gong practitioners, on Aug. 29, 2017. (Mark Cao/Epoch Times)
China

SACRAMENTO, Calif.—Impassioned speeches asking Californians to stand together against tyranny were heard at the state Capitol on Aug. 31, when around 200 human rights activists gathered to show support for SJR 10—a state resolution that condemns the Chinese Communist Party for its ongoing persecution of Falun Dafa practitioners.

State legislators, as well as three survivors of the brutal persecution, implored Californians to stand together against the “egregious state-sponsored violence,” as one senator put it, that is now occurring in China.

On Aug. 29, the resolution had passed the judiciary committee hearing unanimously. But then on Sept. 1, the day following the rally, the state Senate unexpectedly voted to refer SJR 10 back to the rules committee—essentially blocking it from coming to a vote in the Senate.

The action appears to be the direct result of interference by the Chinese communist regime in American governmental affairs.

That day, members of the Senate received via email a threatening letter on the stationary of the Chinese Consulate in San Francisco.

“We would like to urgently draw the attention of the California legislature to SJR-10,” the unsigned letter begins.

“This may deeply damage the cooperative relations between the state of California and China,” it continues.

Later, the letter points out the high level of trade between China and California, the great number of tourists from China who visit the state, and the fact that China is the largest source of foreign students who attend California’s colleges and universities.

Then it directly asks legislators not to support the resolution, “so as not to sabotage the friendship and sustainable development between California and China.”

The author of the resolution, Republican state Sen. Joel Anderson, knew that passing an official condemnation of China’s human rights abuses would not be easy.

At the rally, Anderson said: “I proudly stand here with everyone to condemn the Chinese government for their persecution of Falun Gong practitioners. … It takes great courage to stand up against persecution, to stand up against one of the greatest nations in the world—China—and to call them out for their practice of harvesting organs and the genocide they have created against Falun Gong. Together, we’ve taken our first steps toward defending freedom and human rights.”

Falun Dafa, also known as Falun Gong, is a traditional Chinese spiritual discipline that consists of performing gentle exercises and living by the principles of truthfulness, compassion, and tolerance. First brought to the public in 1992, it spread rapidly throughout China, and by 1999, there were 70 million to 100 million people practicing.

Fearing its popularity—there were more Falun Gong practitioners than members of the Communist Party—then Chinese leader Jiang Zemin banned the practice and enlisted the nation’s entire security complex, media, and judiciary to participate in a massive persecution campaign that continues today.

The persecution over the past 18 years has amounted to genocide. At the rally, Anderson used this weighty word and called for it to be stopped.

“If you feel strongly and you believe that nobody should be persecuted or executed for their body parts because they practice a faith, then you need to call your legislator and tell them that they need to stop genocide in China,” he said.

Kilgour and Matas determined that the allegations were true.

In 2016, Kilgour and Matas, joined by Ethan Gutmann, author of “The Slaughter: Mass Killings, Organ Harvesting, and China’s Secret Solution to Its Dissident Problem,” released an updated report.

The report explains that it represents “a meticulous examination of the transplant programs of hundreds of hospitals in China, drawing on media reports, official propaganda, medical journals, hospital websites, and a vast amount of deleted websites found in archive.”

The authors determined that most of the organs come from Falun Gong practitioners, with a lesser number from other prisoners of conscience drawn from Tibetans, Uyghurs, and House Christians.

The rally was in part a celebration that the resolution had passed the judiciary committee and in part encouragement, to help whip up support for the resolution in Senate.

At the heart of Anderson’s resolution were three statements:

“Resolved by the Senate and the Assembly of the State of California, jointly, That the Legislature expresses support for Falun Gong practitioners’ 18-year nonviolent resistance against persecution, which exemplifies uncompromising courage and human spirit; and be it further

Resolved, That the Legislature condemns any government-sanctioned persecution of Falun Gong practitioners in the People’s Republic of China or elsewhere; and be it further

Resolved, That the Legislature urges the President and the Congress of the United States to condemn any government-sanctioned persecution of Falun Gong practitioners in the People’s Republic of China or elsewhere …”

Voepel also spoke at the rally, affirming the importance of the resolution and the message it sends to the Chinese regime.

“It makes the vital statement that we stand against oppression—against a regime that wants to control the minds and bodies of its own people,” Voepel said. “Organ harvesting is big money over there—it’s an underground economy.

“That is pure evil in the world, and I will stand up against evil in any way I can.”

Three Falun Gong practitioners who now live in California also spoke, sharing heartbreaking stories of being arrested, brainwashed, and brutally tortured simply because they would not give up their beliefs.

They also described how, while held in the labor camps, Falun Gong prisoners were targeted for regular blood tests and brief medical exams—odd, considering the regime did not care for the health of prisoners it was torturing. They believed these tests were for the purpose of establishing a living organ bank. One medical researcher compared detained practitioners to lobsters in the tank in a seafood restaurant, ready to be plucked out whenever needed.

David Xu was a financial software engineer in China. His good friend was tortured to death while imprisoned in 2011. In April 2016, Xu feared it was his turn.

Kidnapped from his home, he was taken to a brainwashing center where he endured extreme torture. The most frightening moments for him were when his blood was taken. He was well aware of the regime’s practice of harvesting the organs of Falun Gong practitioners and was terrified for his life. He went on a hunger strike for 18 days before he was released.

Safe in America, he can’t stop worrying about his friends and family back in China. “Even though I escaped, it is hard for me to find peace in my heart because there are still so many Falun Gong practitioners in prison there.”

His story is echoed by Jie Li and Yolanda Yao. Speaking to the crowd, they both shared chilling stories of imprisonment, torture, and mysterious blood tests. They saw fellow practitioners beaten mercilessly before one day disappearing.

Yolanda Yao, now a resident of Sunnyvale, had to give up her doctoral studies because of the persecution. She was arrested in 2011 and spent two years imprisoned. “Words cannot describe the pain I have felt. I experienced firsthand the brutality of the persecution of Falun Gong practitioners. Those were the darkest moments of my life.”

She spoke of being subjected to around-the-clock brainwashing sessions and unrelenting mental and physical torture while imprisoned in Beijing Women’s Labor Camp. When she was forced to sit in a child’s chair for 10 to 11 hours every day, her legs and feet would swell immensely, resulting in severe bruising and ulceration in her back and hips.

She was also forced to perform to slave labor in summer temperatures surpassing 100 degrees, and was once soaked in pesticide when the 70-pound barrel she was carrying on her back leaked all over her.

The most horrific thing she experienced, however, was the blood tests she and fellow Falun Gong practitioners were given three times a year. Like Xu, she was aware of the forced organ harvesting and was certain that their blood was being tested to evaluate them as potential candidates.

Although she is safe in California, her heart is still in China with her elderly parents, who are both imprisoned for their beliefs. “The suffering and torment I experienced in the labor camp still haunts me to this day. It horrifies me to know that my parents are suffering the same fate,” she said.

Her only solace is the hope that international pressure and individual actions will lead to their release. She ended her speech with a plea:

“I humbly ask for your help in raising public awareness of this brutal persecution, and hope that together we can bring an end to 18 years of harassment, torture, killing, and most heinous of all, forced organ harvesting of Falun Gong practitioners.”

State Assemblyman Tom Lackey shared his hope that the people of California will stand together and oppose these crimes. “That you have a government that would actually approve such a hurtful and wicked practice is just unimaginable,” Lackey said. “These people have no control. Those of us who do need to speak very loudly so we can influence the government and pressure them to change this policy so that lives can be saved.”