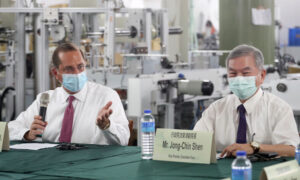 US Ambassador Calls For Taiwan to Be Part of United Nations

“The world needs Taiwan’s full participation in the United Nations system, particularly with respect to matters that affect public health and economic development,” said Craft while speaking at a virtual Global Cooperation and Training Framework (GCTF) event on Sept. 29.

“A United Nations without Taiwan’s full participation is cheating the world,” Craft added. “Taiwan deserves the highest platform where it can share its remarkable innovation and expertise in data science, in medical technology, and in cutting-edge communications.”

The United States and Taiwan established the GCTF in June 2015, using it as a platform for Taiwan to share its expertise with partners around the world. Japan joined the platform in 2019.

Taiwan lost its seat at the United Nations to China after the world body passed U.N. Resolution 2758 in 1971. Eight years later, in January 1979, the United States ended its diplomatic ties with Taiwan in favor of Beijing—which considers the island a part of its territory, despite its self-ruled status with its own democratically-elected government.

Washington has since maintained a non-diplomatic relationship with Taipei based on the Taiwan Relations Act (TRA), signed into law by former President Jimmy Carter in April 1979.

The TRA authorizes the United States to provide the island with military equipment for its self-defense, and set up a nonprofit corporation called the American Institute in Taiwan, which is now the de-facto U.S. embassy on the island.

The GCTF event took place while U.N. members were holding the general debate of the 75th session of the General Assembly, which began on Sept. 22.

Craft added: “Taiwan has a trusted friend in President Donald J. Trump, and an administration that champions the international role that Taiwan holds.”

Washington and Taiwan relations have warmed considerably under the Trump administration, which sees Taiwan as an important ally in its Indo-Pacific strategy. Two senior U.S. officials have visited Taiwan in the past two months—Health and Human Services Secretary Alex Azar and Under Secretary of State Keith Krach.

The U.S. ambassador also criticized the Chinese regime for making “every effort to suppress Taiwan’s international profile,” actions that she said were undertaken out of fear “of a free and open society.”

Craft pointed to the current pandemic as another reason why Taiwan should participate in the UN. She explained that Beijing “blocked Taipei’s attempt to warn the world that COVID-19 spreads from human-to-human contact.”

COVID-19 is the disease caused by the Chinese Communist Party (CCP) virus, commonly known as the novel coronavirus.

Taiwan officials said they warned the World Health Organization that the virus could be contagious in an email on Dec. 31. According to internal government documents, Beijing knew of the virus’s potential to spread among humans, but did not publicly acknowledge it until Jan. 20.

On Jan. 21, both Taiwan and the United States reported their first confirmed COVID-19 cases.

Craft also applauded Taiwan’s public-private partnership for ramping up local mask production capacity from about 2 million to nearly 20 million daily—key to Taiwan’s success in containing the spread of the virus, she said. As of press time, Taiwan had 514 COVID-19 cases, with seven deaths.

And since April, Taiwan has donated more than 50 million masks to countries around the world.

Taiwan President Tsai Ing-wen thanked Craft for “recognising #Taiwan’s contributions to public health & economic development and supporting our inclusion in the @UN system,” in a tweet on Wednesday.

Tsai added: “We know that with greater int’l participation, we can do even more for the world.”

12 of Taiwan’s diplomatic allies, including Belize, Eswatini, and Nicaragua, publicly called for Taiwan’s inclusion in the U.N. system during the U.N. general debate, according to Taiwan’s government-run Central News Agency.