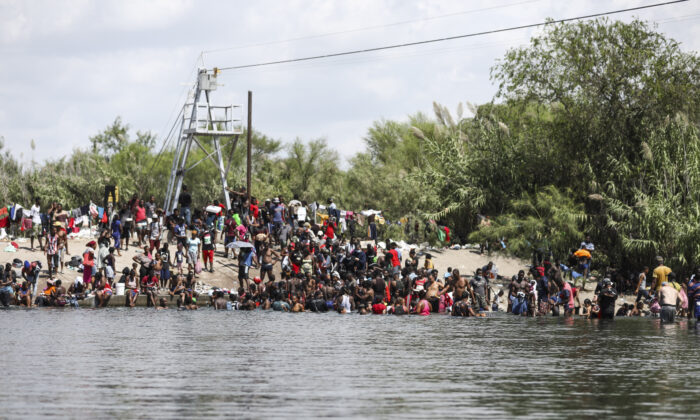 Illegal immigrants bathe and play on the U.S. side of the Rio Grande, the international boundary with Mexico, in Del Rio, Texas, on Sept. 18, 2021. (Charlotte Cuthbertson/The Epoch Times)
Republicans

In a joint letter (pdf) to the White House on Monday, 26 Republican governors requested a meeting with President Joe Biden to consider solutions to the ongoing crisis at the southern border.

Arizona Gov. Doug Ducey and Texas Gov. Greg Abbott led GOP officials in the effort to end the uncontrolled number of illegal migrants entering the United States. South Carolina Gov. Henry McMaster posted the letter on his Twitter account, writing that he was proud to join 25 other governors to request a meeting with the president.

“The border is out of sight and out of mind in the Biden Admin and the negative impacts of his reckless open border agenda can no longer be ignored.”

The governors stressed the damage that the months of illegal crossings have caused and wrote that Biden’s border policy, “has instigated an international humanitarian crisis, spurred a spike in international criminal activity, and opened the floodgates to human traffickers and drug smugglers endangering public health and safety in our states.”

They cited the fact that apprehensions are up 500 percent from last year and this surge of entry is bringing with it criminals and drugs that are impacting all states. Customs and Border Patrol recorded the number of total encounters with illegal immigrants to be over 200,000 for the month of August.

This letter comes as thousands of illegal immigrants from Haiti, Cuba, and Venezuela are pouring into the Texas town of Del Rio.

Democratic Del Rio Mayor Bruno Lozano has called out Biden and Vice President Kamala Harris for failing to make an appearance in his town as it battles with an overwhelming illegal immigrant crisis that has left Border Patrol agents struggling to process thousands of people.

More than 15,000 illegal immigrants have entered the United States in recent days and taken shelter underneath the border bridge connecting Del Rio, a Texas town of about 35,000 people, to Ciudad Acuña, Mexico.

In a post alongside aerial footage showing thousands of immigrants surrounding the overcrowded bridge in makeshift tents, the mayor wrote, “We need you to visit Del Rio, Texas.”

Lozano also responded to a Twitter post shared by Harris on Saturday that read, “The U.S. is falling behind, on a global scale, on investing in childcare. We invest fewer public dollars in early childhood education and care relative to GDP than almost all other developed countries. With our Build Back Better Agenda, @POTUS and I are determined to change that.”

Questioning Harris and Biden’s failure to visit Del Rio again, he asked, “The US is failing to protect its borders. Why aren’t you here? @POTUS.”

Border Patrol Chief Raul Ortiz told Fox News on Sept. 19 that single adult men will be expelled under the federal government’s Title 42 rule, although most family units who have crossed the border illegally will be processed and released into the United States with a notice to appear in an immigration court.

Meanwhile, the governors say that the president has not fulfilled his duty to secure America’s borders and instead states have had to take action.

“While governors are doing what we can, our Constitution requires that the President must faithfully execute the immigration laws passed by Congress. Not only has the federal government created a crisis, but it has also left our states to deal with challenges that only the federal government has a duty to solve,” the letter stated.

The governors urge Biden to convene the meeting as soon as possible and no longer than two weeks after receiving the letter.

Katabella Roberts and Jack Phillips contributed to this report.