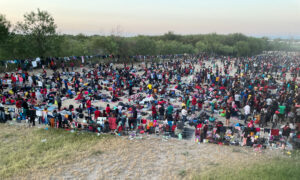 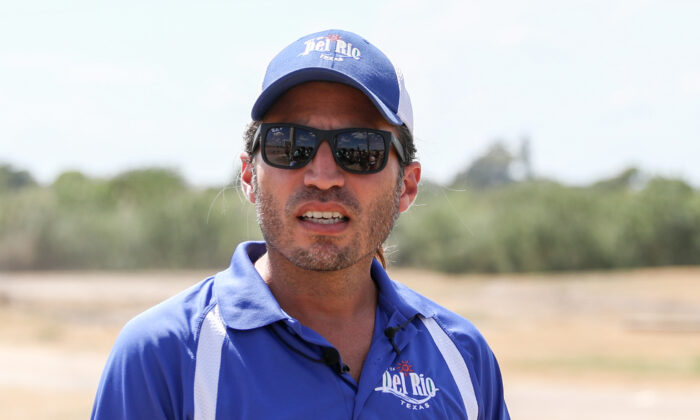 Del Rio Mayor Calls Out Biden, Harris for Failing to Visit Border in Crisis: ‘Why Aren’t You Here?’

Democratic Del Rio Mayor Bruno Lozano has called out President Joe Biden and Vice President Kamala Harris for failing to make an appearance at his town as it battles with an overwhelming illegal immigrant crisis that has left Border Patrol agents struggling to process thousands of people.

More than 15,000 illegal immigrants, including Haitian, Cuban, and Venezuelan nationals, have illegally entered the United States in recent days and taken shelter underneath the border bridge connecting Del Rio, a Texas town of about 35,000 people, to Ciudad Acuña, Mexico.

While numerous official figures and congressmen, including Rep. August Pfluger (R-Texas) and Sen. Ted Cruz (R-Texas), have visited the town, shared images, and urged the Biden administration to take action, both Biden and Harris have been noticeably absent.

Del Rio now: US on the left, Mexico on the right.
Constant stream back and forth as the illegal immigrants get supplies in Mexico.

Law enforcement preparing against a rush for the border fence as the aliens find out they might be deported. pic.twitter.com/TgxK5Sdrv1

On Sept.18, as Pfluger warned that the situation has “reached boiling point,” Harris made an appearance at Howard University where she led a coin toss at the university’s football event.

Questioning why the vice president, who in March was tasked with handling the border crisis, had not yet visited Del Rio, Lozano asked on Twitter on Saturday, “The VP is able to visit the fun events across the country, while American communities continue to grapple with failed immigration reform. Where is the visit to Del Rio, TX?”

In a separate post alongside aerial footage showing thousands of immigrants surrounding the overcrowded bridge in makeshift tents, the mayor wrote, “We need you to visit Del Rio, Texas.”

Lozano also responded to a Twitter post shared by Harris on Saturday that read, “The U.S. is falling behind, on a global scale, on investing in childcare. We invest fewer public dollars in early childhood education and care relative to GDP than almost all other developed countries. With our Build Back Better Agenda, @POTUS and I are determined to change that.”

Questioning Harris and Biden’s failure to visit Del Rio again, he asked, “The US is failing to protect its borders. Why aren’t you here? @POTUS.”

The Del Rio Mayor also engaged the president, responding to a Twitter post that Biden shared on Saturday regarding his plan not to raise takes for anyone making under $400,000 a year.

Lozano replied, “The President has a plan for taxes. Where is the plan to protect our southern border?”

The mayor also asked Biden directly, “Where is your plan to protect American communities at the southern border? I spoke to Governor Abbott today. We have developed a temporary plan, we’d like to see yours.”

However, most family units who have crossed the border illegally will be processed and released into the United States with a notice to appear in an immigration court.