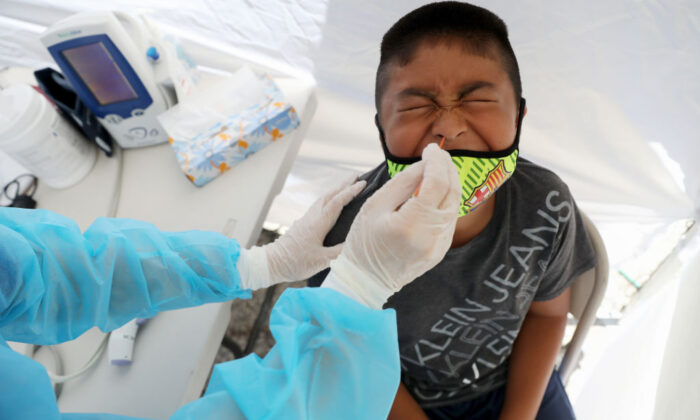 Screening testing of children without symptoms for COVID-19 may cause more harm than good and is an expensive intervention, physician and epidemiologist Dr. Tracy Beth Hoeg says.

Such a surveillance testing program is costing the Biden administration $10 billion. In January 2022, the administration announced that it would double down to keep schools safe by “increasing the number of COVID-19 tests available to schools by 10 million per month.”

Hoeg said these programs hardly ever lead to an “improvement in their health.”

“I want to mention that proposing to do rapid screening testing in school settings such as K-12 or university settings is a highly expensive and burdensome intervention which will almost never lead to an improvement in their health. … And, again, if over 50 test results that say positive are actually negative, this will result in a lot of unnecessary quarantining, lost school days and worry,” Hoeg told The Epoch Times in an email.

A recent study examined the real effectiveness and accuracy of three rapid antigen tests (from Abbott, Quidel, and LumiraDX) in adults who experienced no symptoms or were asymptomatic. Of the 623 who tested positive for COVID-19, the authors found that 62 percent were false-positive when confirmed with a quantitative polymerase chain reaction (qPCR) test, and only 38 percent were truly positive.

Hoeg, who was not involved in the study, said she wasn’t surprised by the findings, as she and other experts had predicted last year that “false-positive COVID test results in schools would be a major problem.”

Of the three manufacturers of the antigen tests used in the study, only Quidel replied to The Epoch Times’ inquiry.

“The Results section of the JAMA study does not provide sufficient data to directly comment on the Sofia performance,” a Quidel spokesperson told The Epoch Times via email. “The data, as presented, supports the use of serial testing as part of screening programs introduced by the FDA in March 2020.”

Screening testing differs from diagnostic testing in that it’s not testing people to treat them, but more to identify a potential outbreak.

The Food and Drug Administration (FDA) said that “screening involves testing asymptomatic individuals who do not have known or suspected exposure to COVID-19 in order to make individual decisions based on the test results.”

The Centers for Disease Control and Prevention (CDC) acknowledges that rapid antigen tests give better results when the individual tested has symptoms, however, the health agency claims that regular screening for COVID-19 in schools “is a safe, effective way to help prevent the spread of COVID-19” and keep schools open for in-person instruction.

“Many people with COVID-19, especially children and teens, don’t have symptoms but can still spread the virus, so regular testing helps find infections before they can spread to others,” the CDC said.

Dr. Arron Kheriaty, a fellow at the Ethics and Public Policy Center, disagrees with the CDC, saying asymptomatic people don’t spread the virus, and the claim of asymptomatic spread being the driver of COVID-19 isn’t based on science.

“Given that no respiratory virus in history has been known to spread asymptomatically, this should not have surprised anyone,” Kheriaty wrote in an op-ed. “The specter of people with no symptoms being potentially dangerous—which never had any scientific basis—turned every fellow citizen into a possible threat to one’s existence.”

Denmark relaxed its recommendation on testing early last month, saying it’s not necessary to get tested “unless there is a health professional reason to do so.”

“We recommend that you get tested if you experience symptoms of COVID-19 and are at increased risk for a serious course of illness due to COVID-19,” the Danish Health Authority said.

For people who experience symptoms but are not at high risk of serious illness, the health authority recommends staying home, while individuals who live with or have had contact with an infected person don’t need to get tested.

“This is a much more targeted sensible type of testing that is high enough yield to recommend but does not place undue burden on society at large,” Hoeg said. “Testing is recommended for symptomatic high risk.

“I would add it also makes sense to get tested if you have symptoms, especially with a known exposure, and you live with or care for someone who is highly immune-compromised (for example frail elderly or bone marrow transplant recipient).”

Norway has a similar guideline for testing, but goes further, in that testing children is not recommended, even if they have COVID-19 symptoms.

COVID-19 tests have come under scrutiny recently, with the FDA issuing warnings for three different at-home tests for the possibility of producing false-positive results, and the recall of three other rapid antigen tests that contained a potentially toxic substance, sodium azide.

For screening testing at schools, Hoeg said she’s concerned about the unnecessary harm and the high cost, such as the program proposed in California that would require all schools, child care centers, and on-site afterschool programs to create regular testing plans.

“In California, there is a proposed bill that would cost $1.5 billion for COVID screening testing in K–12 schools. These tests would not only produce more false positives than true positives but would also be excessive measure for a disease that for children generally causes no symptoms or cold symptoms and does not with Omicron cause more severe disease than seasonal influenza,” Hoeg said.

“To me, this bill is an example of a double harm—it is very expensive, and rather than improving health, it causes missed school days and disrupts families’ lives.”

The bill has advanced to the state assembly Education Committee after it was approved in a committee vote of 9–2 on March 31.