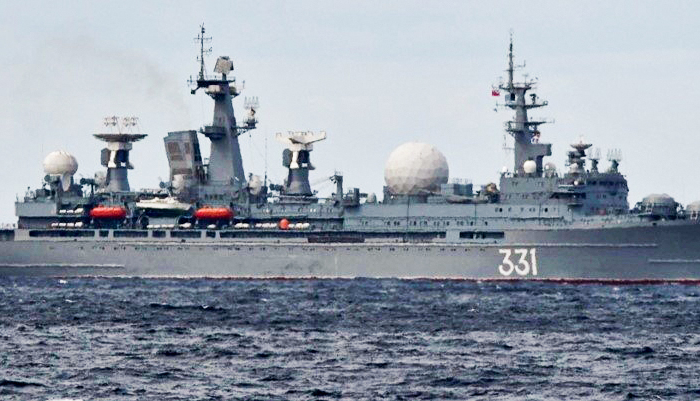 Russian Navy's Marshal Nedelin-class missile range instrumentation ship No.331 sails on the sea near Japan on Oct. 18, 2021 (Joint Staff Office of the Defense Ministry of Japan/Handout via Reuters)
International Relations

TOKYO—A group of 10 naval vessels from China and Russia sailed through a strait separating Japan’s main island and its northern island of Hokkaido on Monday, the Japanese government said, adding that it is closely watching such activities.

It was the first time Japan has confirmed the passage of Chinese and Russian naval vessels sailing together through the Tsugaru Strait, which separates the Sea of Japan from the Pacific.

While the strait is regarded as international waters, Japan’s ties with China have long been plagued by conflicting claims over a group of tiny East China Sea islets. Tokyo has a territorial dispute with Moscow, as well.

“The government is closely watching Chinese and Russian naval vessels’ activities around Japan like this one with high interest,” Deputy Chief Cabinet Secretary Yoshihiko Isozaki told a regular news conference on Tuesday.

“We will continue to do our utmost in our surveillance activity in waters and airspace around Japan.”

A Japanese Defense Ministry spokesperson said there had been no violation of Japanese territorial waters and no international rules were broken by the passage of the vessels.

Russia and China held joint naval drills in the Sea of Japan as part of naval cooperation between the two countries from Oct. 14–17 involving warships and support vessels from Russia’s Pacific Fleet.

Moscow and Beijing have cultivated closer military and diplomatic ties in recent years at a time when their relations with the West have soured.