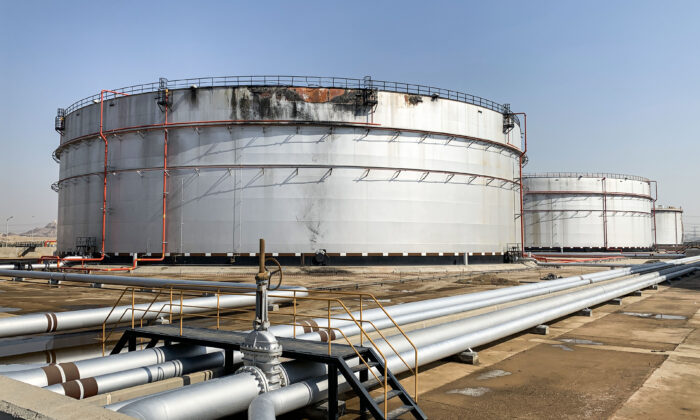 A view of a damaged silo at the Saudi Aramco oil facility in Saudi Arabia's Red Sea city of Jeddah, on Nov. 24, 2020. (Fayez Nureldine/AFP via Getty Images)
Middle East

The missile was intercepted over the city of Dammam, according to a source familiar with the matter who declined to be named and social media reports.

The coalition blamed the attack on the Iran-aligned Houthi forces. There was no immediate claim of responsibility in Houthi-run media.

The coalition also said it intercepted and destroyed ballistic missiles heading toward Jazan and Najran, both in the southern part of the country.

The coalition earlier also reported the interception of three explosive-laden drones headed toward the country.

Eastern Saudi is home to significant oil infrastructure, which has previously been targeted and hit by aerial attacks. An attack in September 2019 on two Aramco plants in the east temporarily knocked out half the country’s oil production.

Yemen’s Houthis, who regularly launch drones and missiles into Saudi Arabia, have claimed responsibility for several attacks on Saudi oil installations in the past.

A source familiar with the matter said there was no impact on facilities belonging to state-controlled oil giant Saudi Aramco and that the attack happened outside of Aramco facilities.

The Saudi-led military coalition intervened in Yemen in 2015, backing forces of the ousted government of President Abd-Rabbu Mansour Hadi fighting the Houthis.

By Maher Chmaytelli and Saeed Azhar