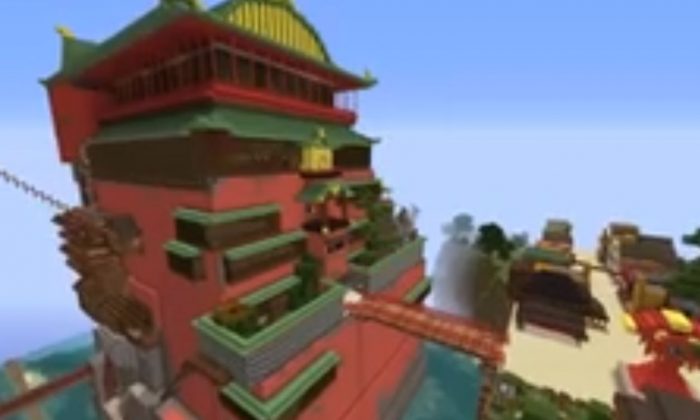 A Minecraft player created the landscape of the Japanese anime “Spirited Away,” and he posted it to YouTube.

Alan Becker, the player, says on his channel that it’s “where I will be unleashing my obsession with Minecraft. In particular, I’ve been working on this Spirited Away project for a few years, off and on.”

“I’m making the entire world: the place where they stop the farm, the clock tower, the field, the ghost town, the pig field, the train tracks, and finally the cottage in the swamp,” he said.

Becker said that he’s trying to make it “100 percent accurate,” and he’s cross-referencing more than 400 screenshots of landscapes in the movie “as well as watching the movie over and over.”

He also designed the buildings’ interiors.

“I’ve compiled all the known concept art that shows the infrastructure of the bath house interior,” Becker added. “I’m also implementing red stone wherever needed in order to make things like elevators and automatic doors and boiler room parts.”

Other Minecraft players have created iconic landscapes and scenes from various movies, including the Death Star in “Star Wars” and the Starship Enterprise in “Star Trek.”

“Spirited Away” is a critically acclaimed animated feature released in 2001 from legendary Japanese animator Hayao Miyazaki.