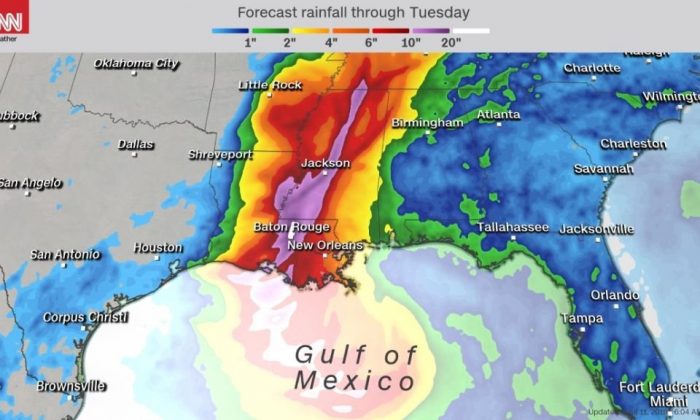 The first tropical system to slam the U.S. this year lashed parts of the Deep South with heavy rains on the morning of July 11, as it spins through the Gulf of Mexico. (CNN)
US News

The first tropical system to slam the US this year lashed parts of the Deep South with heavy rains Thursday morning as it spins through the Gulf of Mexico.

More than 4 million people are under flash flood watches from south-central Louisiana to the western Florida panhandle as the system moves over the warm waters, CNN meteorologist Haley Brink said.

If it reaches winds of 39 mph, it will officially become Tropical Storm Barry and could intensify into a Category 1 hurricane by late Friday. The storm had maximum sustained winds of 30 mph Thursday, and is expected to make landfall along the Louisiana or upper Texas coast Saturday.

But even before it reaches tropical storm status, it’ll deluge the Gulf Coast region with heavy rains, leading to flash flooding that could cause the Mississippi River to rise to dangerous levels.

Southern Louisiana, Mississippi and Alabama, along with the western Florida Panhandle, will especially get drenched Thursday, Brink said.

Governors to Residents: Prepare and Stock Up

As the tropical system strengthens, regional leaders are urging people in the area not to get caught off guard.

In Louisiana, Gov. John Bel Edwards declared a state of emergency and asked residents to have a contingency plan for family and pets. About 10 to 15 inches of rain could fall within 24 hours between Friday and Saturday, he said.

“This is going to be a Louisiana event with coastal flooding and heavy rainfall potentially impacting every part of the state,” he said. “No one should take this storm lightly. As we know all too well in Louisiana, low intensity does not necessarily mean low impact.”

New Orleans got a taste of the tropical system after it spawned its first tornado warning and flash flood emergency in the area Wednesday. It dumped up to 9 inches of rain in parts of the city, flooding streets, homes and hotel lobbies.

The slow-moving storm was crawling at 9 mph Thursday morning, and was 125 miles southeast of the mouth of the Mississippi River, the National Hurricane Center said.

That means it could hover over the same place for long time, dumping rain relentlessly. Storm surge, hurricane force winds and extensive flooding are forecast in the Gulf Coast region into the weekend.

The potential storm surge has prompted the National Weather Service to warn that the Mississippi River could crest at 20 feet in New Orleans, or 1.3 feet below the record. The city is protected to a height of 20 feet.

#NewOrleans has received 4 to 5 inches of rain over the last 24 hours, with reports of flash flooding throughout the city, including the #FrenchQuarter. This comes as @NOAA reported the wettest 12-month period on record in the U.S. dating back 125 years. pic.twitter.com/NDSvbFpvCO

Louisiana officials started closing flood gates over concerns that the storm surge could cause additional flooding. More than 200 flood gates in Orleans and St. Bernard parishes are expected to be closed by Friday, local media reported.

The Southeast Louisiana Flood Protection Authority has a little more than 250 flood gates, according to spokesman Antwan Harris.

The storm’s impact goes beyond flooding and storm surges. If you have any summer road trips coming up this weekend, you may want to gas up beforehand.

The companies have evacuated employees from 15 production platforms and four rigs so far. Three of the 20 rigs operating in the Gulf have also moved off location, out of the path of the storm, it said.

Unlike drilling rigs, which typically move from location to location, production facilities remain in the same location throughout a project’s duration.

And the storm effects are being felt before it makes landfall. US oil rose above $60 a barrel on Wednesday amid worries that the storm system could derail crude production in the Gulf of Mexico.

Shell and Chevron have evacuated nonessential staff from some of their Gulf drilling rigs, company officials said.