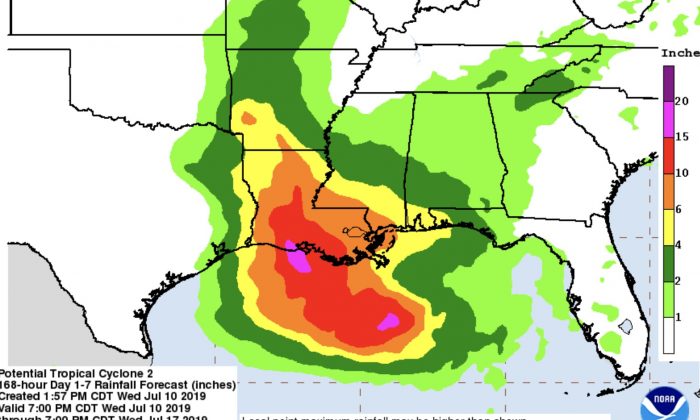 7 day rain forecast for potential hurricane forming in the Gulf of Mexico on July 10, 2019. (National Weather Service/NOAA)
US News

Hurricane Watches Issued for Parts of Coastal Louisiana Ahead of Storm

The National Hurricane Center issued hurricane watches for parts of coastal Louisiana on Wednesday, as the first tropical system to slam the US this year is expected to make landfall as a hurricane.

The watches extend from the mouth of the Mississippi River west to Cameron, Louisiana. They do not include the New Orleans metro area, which was inundated with rain for several hours.

The National Hurricane Center predicts Tropical Storm Barry will form in the Gulf of Mexico by Thursday and strengthen to a hurricane by Saturday, when it’s expected to make landfall along the Louisiana or upper Texas coast. At least one Louisiana parish issued a mandatory evacuation ahead of the storm.

Storm surge, hurricane force winds, and extensive flooding are forecast in the Gulf Coast region into the weekend.

The slow-moving storm was crawling at about 8 mph, the NHC said. That means it could hover over the same place for long time, dumping rain relentlessly.

The storm dumped up to 8 inches of rain on New Orleans in about two hours during the morning rush hour, National Weather Service New Orleans Meteorologist Phil Grigsby told CNN.

“We took in about 2 feet of water in our basement/ground floor level,” Catalano said. “I’m very concerned about the impending storm, with the Mississippi River near flood stage. I’m very worried about more flooding.”

Louisiana Gov. John Bel Edwards said about 10 to 15 inches of rain could fall within 24 hours between Friday and Saturday.

Edwards issued a state of emergency for the state on Wednesday ahead of the storm, and so did New Orleans mayor LaToya Cantrell.

“This is going to be a Louisiana event with coastal flooding and widespread, heavy rainfall, potentially impacting every part of the state,” Edwards said in a new release.

“Now is absolutely the time to pay attention. Heed every single warning that comes from the City of New Orleans, and as you listen to media outlets,” Cantrell said during a press conference. “Pay attention to all tornado, as well as flash flood warnings. Be prepared for the impacts.”

New Orleans City Hall closed Wednesday as the ferocious weather kept pounding the city and will remain closed on Thursday.

Grigsby said the storm system caused a waterspout in Lake Pontchartrain and a tornado over the lake, which damaged two nearby homes.

By Wednesday afternoon, the rain had died down and there were a few scattered thunderstorms in the area, according to the NWS New Orleans.

Residents from Houston to Mobile, Alabama, are bracing for the system’s wrath.

A tropical storm is an area of thunderstorms that produces a circular wind flow with winds from 39 to 73 miles per hour. With a lower wind speed, it would be a tropical depression. Higher, and it would be a hurricane.

Regardless of the classification this system develops into, both Louisiana and Mississippi are forecast to see very heavy rain — more than a foot in some places, Brink said.

The storm system is forecast to produce additional accumulations of 6 to 12 inches of rain near and inland of the central Gulf Coast through early next week, the National Hurricane Center said in its potential tropical cyclone advisory. There will be isolated maximum rainfall of up to 18 inches, the NHC said.

Some oil rigs in the Gulf of Mexico have been evacuated.

Shell has evacuated all nonessential staff from eastern Gulf drilling rigs, with more action on the horizon depending on how the storm develops, spokeswoman Cindy Babski said.

The Mississippi River Could Crest at 19 Feet

Potential storm surge has prompted the National Weather Service to issue a flood warning for the Mississippi River, including at New Orleans, through Saturday.

The NWS said the river could crest at 19 feet, or 2.3 feet below the record. The city is protected to a height of 20 feet.

The Southeast Louisiana Flood Protection Authority said it planned to close more than 90 flood gates along the Mississippi River in the next 24 hours ahead of the storm. The system has a little more than 250 flood gates, according to Antwan Harris, a spokesman.

“No one should take this storm lightly,” Gov. Edwards said.