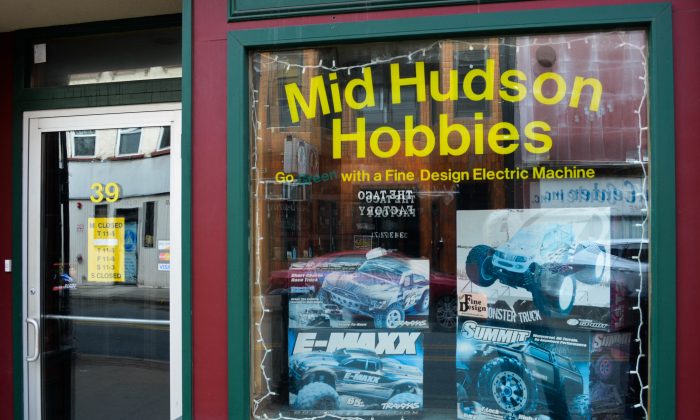 MIDDLETOWN—Danny Fine tells how George Clooney played with a quarter-sized batmobile during a break in filming a Batman movie and had so much fun that he broke a $30,000 movie camera that had just filmed a scene. “They laughed it off and shot the whole thing all over again,” he said.

Danny has this and other stories of the days he and his brother Chris Fine made cars for the Batman franchise and other films for Warner Bros. Entertainment, Inc.

Walk into Mid-Hudson Hobbies and proprietor Danny Fine says you will never grow up.

They made the electric bases for the quarter-size versions of the real vehicle used in the movies. Warner Bros. bought about 65 of their cars in the 1980’s, which have been used in all the sequels.

Danny says the film company used the chassis in other movies—the tunnel sequence in “Daylight” with Sylvester Stallone and the initial scenes in “Escape from L.A.”

“When they wanted to crash them, it was too expensive to crash the full-size vehicle,” Danny explained.

Their work for Warner Bros. provided seed money for their toy car business. Today the brothers exercise their love for toys at Mid-Hudson Hobbies on Middletown’s North Street.

Danny and his brother share the responsibilities of running the store. Danny builds the models and works with customers. Chris handles the online selling and business paperwork. The brothers have a website, Fine Design, where people can order toys.

Walk into Mid-Hudson Hobbies and Danny says you will never grow up. Proof of that is a group of men who race their own custom slot cars, electrically-powered miniature race cars that travel in a slot in the track, every Thursday night at the store’s in-house speedway. The track, which takes up most of the store space, has hand-held gear sticks that control how fast a slot car will go. “When you let up, you break, when you squeeze, you get voltage to the cars,” Chris said.

Chris said the racers use standard slot cars at 1/24 scale. The die-cast models can weigh over a pound, and the weight holds the toy car on the track.

Everybody wants to be deep down in their heart a race car driver.
— Chris Fine of Mid-Hudson Hobbies

On April 28, Bill Terbusch, Mark Connoly, Ken Costsa, Zack Kohler and his dad, Ed Kohler were racing their custom cars.”Everybody wants to be deep down in their heart a race car driver. Here is a way to have fun, relaxation, and be able to shut off the regular things in life and have fun no matter what your age,” Chris said. He added some of the guys who race slot cars on Thursday nights actually race at the track in life-sized cars, or have raced and are now retired.

Danny said they have turned collectible versions of  “legend cars” into slot car racers. “This opened up a whole new market for these cars that most people just kept on the shelf. It’s never been done before,” he said.

“That feeling of fun never changes for any of us,” Danny said. “These cars don’t care who is behind that remote. As long as you know how to work it, you can have fun just as much as the next guy.”

Shawn and Melissa Deloatch came in to check on a repair for a Stampede VXL truck Shawn recently bought. Danny agreed to fix it, no questions asked.

Shawn played with cars as a youngster but stopped as he grew up. Recently he said he and his wife were walking around the neighborhood and saw the store. They were intrigued.

“We walked in and started looking.” After a few more window shopping visits, he bought the truck. “I fell in love with it once again. I’ve got six or seven more trucks to buy. This is just the beginning,” he said.

Melissa says it gives her personal time to “zone out and actually be yourself.” It’s also quality time with her loved one, she said.

Danny said, “we all play together and that’s the way it works. The feeling of fun that you had when you were five is the same, whether you’re five or 95. It doesn’t matter if you’re male or female.”

How to Stay Young

Collecting cars is a sort of fantasy activity. Some customers buy monster trucks, some sleek racers, others prefer wreckers, police cars, or commemorative replicas. Chris said most of the guys have 25 to 30 cars, “minimum.” He compares it to women’s love of shoes.

There is another benefit to playing with toy cars. Danny said racing the toys develops hand and eye coordination skills. When learning to drive, if someone has raced slot cars, they know to slow down at a turn, he said.

“This is hand and eye coordination that’s drilled into your depth perception, into your mind. By the time these kids get out there and it’s time to drive, they realize, no matter what, you can’t be speeding down a straightaway, you have to watch out for the next guy,” Danny said.

A lifetime of acquiring engineering and mechanical skills have allowed the brothers to indulge in this pastime and to share it with others. The brothers learned their craft over 30 years of trial and error. If they could not afford something they wanted, Danny said their parents encouraged the brothers to “make one yourself.”

Both worked as mechanics. They operated an appliance business as well, but soon realized it was not much fun. “Your youth goes away,” Danny said. They started the hobby store in 1985.

“I’ve been engineering toys for a long time,” Danny said. “We’ve had a good time doing this. This is a childhood dream come true. I get to build the cars that I get to play with.”